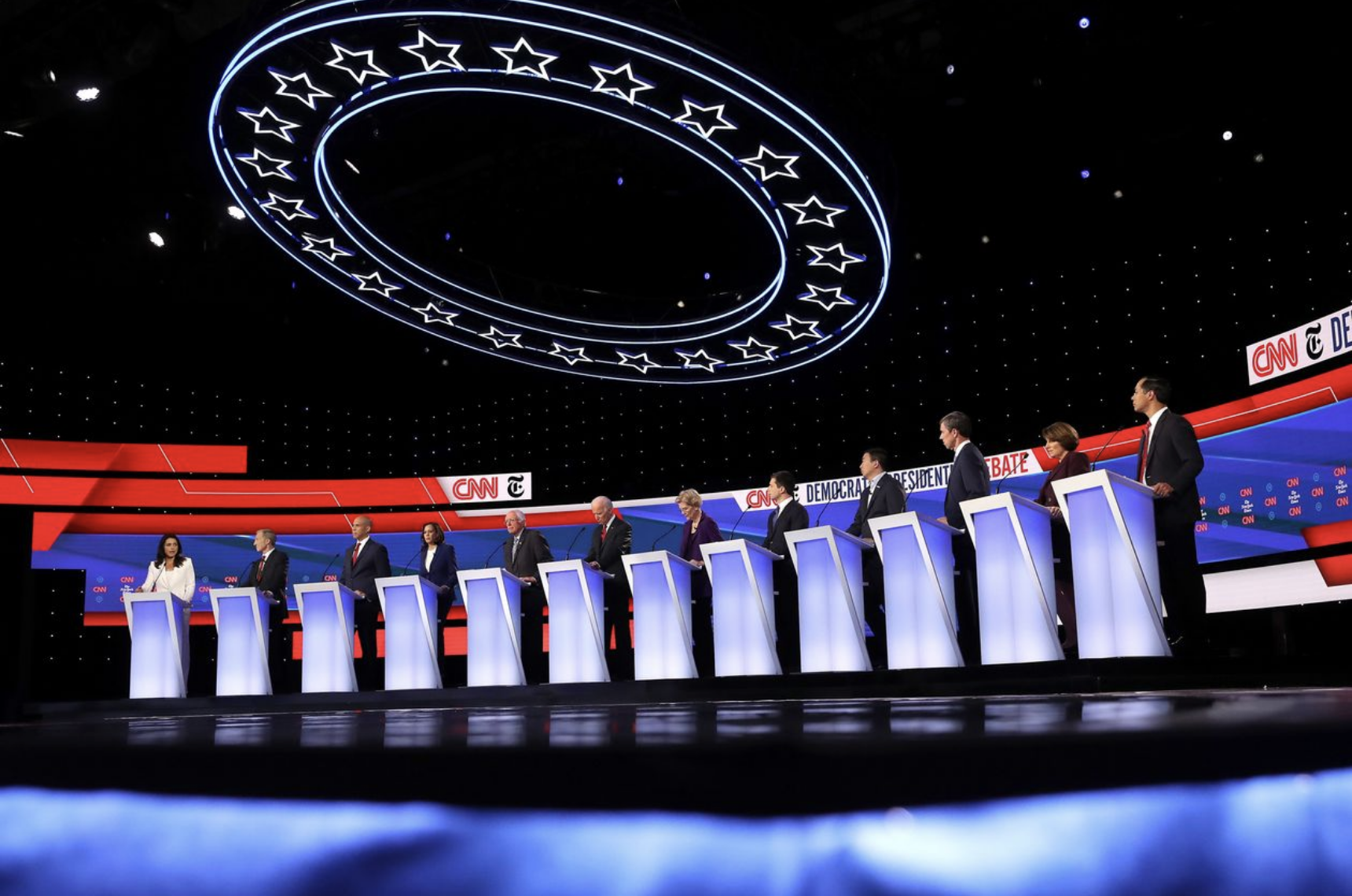 Tuesday’s debate moved at a frantic pace as 12 Democratic presidential wannabes stuffed as many words as they could into their 75 seconds for answers and 45 seconds for rebuttals. All that talking, however, did nothing fundamental to alter the Democratic race.

The opening question on impeachment reinforced the impression that Democrats are obsessed with removing President Trump by a vote of Congress rather than a vote of the people. Until the Iowa caucuses, voters will hear much more about congressional Democrats wanting to impeach Mr. Trump than about their presidential candidates’ plans. “The impeachment thing” will crowd out “the vision thing.”

One of Tuesday’s surprises came when moderator and CNN anchor Anderson Cooper absolved Joe Biden and his son Hunter of wrongdoing when the younger Mr. Biden was brought onto the board of a Ukrainian company for no reason other than he was the vice president’s son and got paid as much as $600,000 a year for it. Apparently unaware something can be wrong and inappropriate without being criminal, Mr. Cooper pre-emptively reassured the audience, “I want to point out there’s no evidence of wrongdoing.” It was a reminder that Democrats have debate moderators who are on their team.

Like earlier debates, this one drew almost every Democratic candidate further to the left, as they offered or endorsed fringe and deeply unpopular proposals. Sen. Kamala Harris did her part Tuesday by declaring she’d require the Justice Department to approve any state law aimed at regulating abortion before a state could implement it. So much for federalism.

Moderates like Sen. Amy Klobuchar pushed back on the party’s leftism, but Democrats have handed Mr. Trump a vast store of general-election ammunition with their proposals for free this and free that, for ever-higher taxes and more-centralized government, for a job-crushing Green New Deal, for open borders and abolishing private health insurance.

Though Sen. Elizabeth Warren was attacked from both flanks over her refusal to admit that her health-care plan is vague and costly, the attacks failed to boost the attackers. This has been the case throughout the debates, with one exception: when Ms. Harris assailed Mr. Biden in the June 27 debate over his opposition to forced busing four decades ago. Even then, her bump in the polls was temporary. After the Sturm und Drang, voters figured out she and Mr. Biden more or less agreed on the issue.

It’s hard to point to any truly memorable debate moments this year that boosted a candidate. Instead, candidates have gained traction by their campaigning between debates. Consider Ms. Warren. Her “I’ve got a plan for that” summer offensive consolidated her support among the party’s most liberal members at the expense of Sen. Bernie Sanders and Ms. Harris. Similarly, Robert Francis O’Rourke may have stabilized his faltering campaign with his emotional (if unconstitutional and unwise) response to the mass murders in his hometown of El Paso, Texas, calling for gun confiscation.

The debate rules have had an outsize impact on the race, distorting each candidate’s spending. Candidates blew tons of moola on expensive internet and direct-mail prospecting—often losing money to gain new contributors—simply to acquire the number of donors required to enter the next debate. Campaigns also ran digital and TV ads to reach the polling threshold in state surveys, knowing this expensive bump will be gone long before polls open next year.

The debates have also kept minor candidates in the race longer by giving them a chance to advance a memorable idea or line. Andrew Yang is still hanging around because he used earlier debates to pitch a universal basic income—Washington would send everybody $1,000 a month—an idea distinctive enough to get him the 2% in polls the debate rules required. Similarly, billionaire Tom Steyer’s monomaniac focus on impeachment and Rep. Tulsi Gabbard’s extreme noninterventionism and pro-Assad stance won them the required 2%, even though it’s impossible to see either going the distance.

These Democratic debates won’t have a significant impact on the race until there are fewer candidates, more sustained engagement between them, and a less frantic pace. For now, debates are at best marginally entertaining. Mr. Sanders allayed concerns about his recent heart attack somewhat, but otherwise the Democratic race isn’t much different today than it was before the Democratic dozen mounted the stage in Ohio. The race remains frozen in place, but that won’t last. It never does.