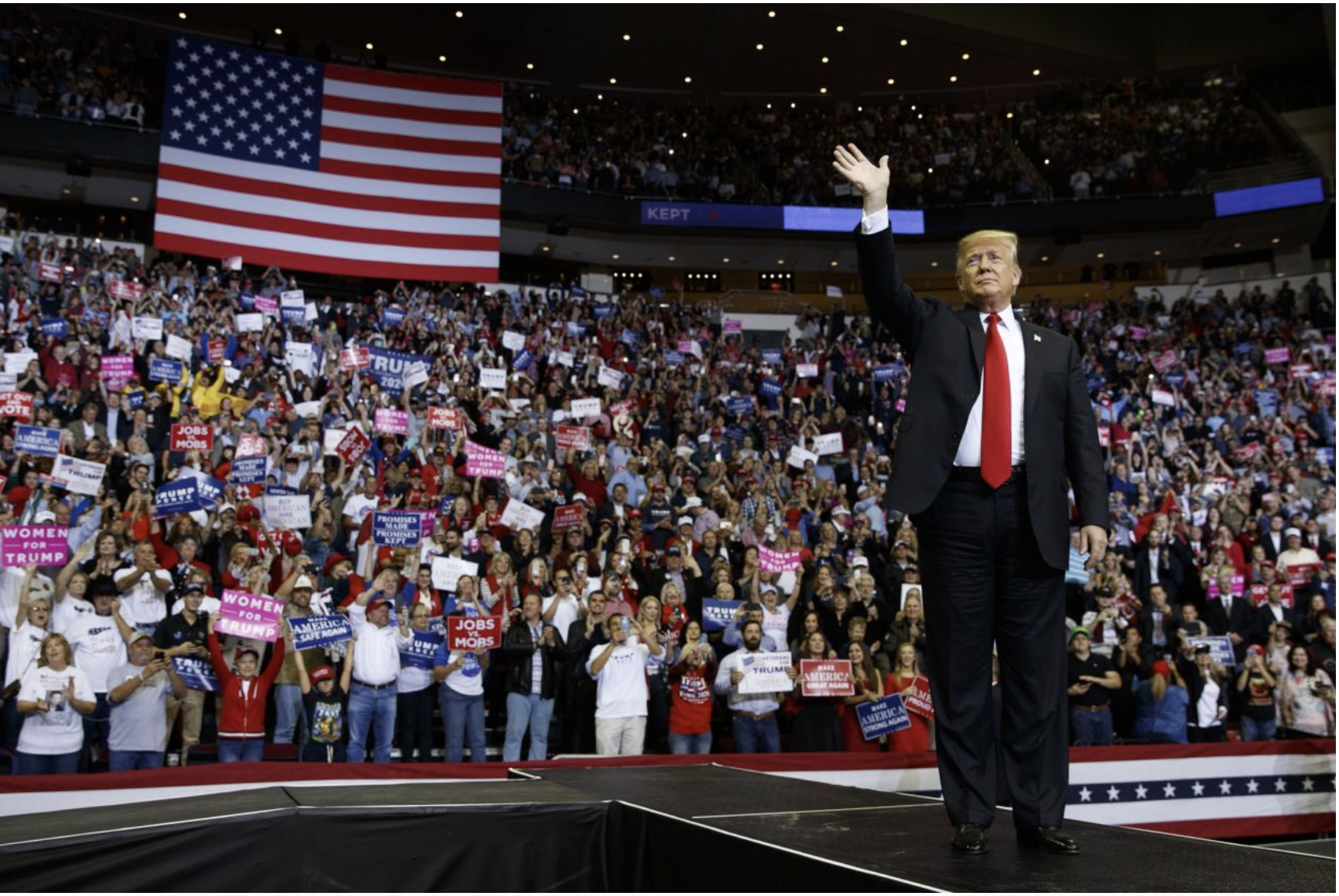 ‘I am on the ticket because this is also a referendum about me,” President Trump said at a Mississippi rally on Oct. 2. He is correct: Every midterm election is to some degree about the Oval Office’s occupant.

With rare exceptions—FDR in 1934, Bill Clinton in 1998 and George W. Bush in 2002—the party in power loses ground in the midterms both in Congress and down the ballot. Voters almost always seek to provide a check on the incumbent party, prod it to deliver on its promises, or both.

Republicans received good news this week as a new Gallup poll pegged Mr. Trump’s job approval at 44%, up 6 points in the past month. That’s near his all-time Gallup high of 45% after the June summit with North Korea’s Kim Jong Un. The new NBC/Wall Street Journal poll puts the president’s approval at 47%, a record high in that survey for his time in office. Mr. Trump’s cumulative third-quarter Gallup rating was 41.2%. That’s about where Ronald Reagan and Bill Clinton were at this point in their first terms. Yet voters hammered both presidents in the midterms that followed. Republicans lost 26 House seats in 1982 and Democrats shed 54, and their majority, in 1994.

Still, Mr. Trump is likely to preside over a rare midterm gain in the Senate. This is the most favorable Senate map for the party in the White House since senators were first popularly elected in 1914. Twenty-six Democrat-held seats are on the ballot, compared with just nine Republican seats. Ten of the Democrats’ seats are in states Mr. Trump carried in 2016, and most key Senate races are being fought where Mr. Trump’s approval ratings are higher or much higher than his national average.

Still, the White House must be shrewd if Republicans are to expand their Senate edge and keep the House majority or at least minimize losses. A recent private poll in a state with a major Senate race found 38% of voters approve of Mr. Trump and his policies, while 43% disapprove. But there’s a third group of voters: 16% dislike Mr. Trump personally but favor his policies. To win in many contests, Republican candidates must not only hold the crowd that likes everything about the president but also corral most of the half-happy voters who are pleased with Mr. Trump’s results but not how he handles himself.

This suggests Mr. Trump should consider holding fewer rallies and making more substantive moves in the campaign’s final two weeks. He may mock the idea of “acting presidential,” but he tends to rise in voters’ estimation when they see the White House engaged in actual policy-making. GOP candidates must also deepen their own profiles, distinguishing themselves from the president—as Florida gubernatorial hopeful Ron DeSantis, a Trump acolyte, has done in opposing oil drilling in the Sunshine State’s waters.

The midterms aren’t only about Mr. Trump. If Democrats lose ground in the Senate, much blame goes to Sens. Chuck Schumer and Dianne Feinstein. As minority leader, Mr. Schumer failed to create an effective loyal opposition, and as ranking Democrat on the Judiciary committee, Mrs. Feinstein all but singlehandedly stoked a surge of conservative interest in the election—though it was already under way—by utterly mishandling Justice Brett Kavanaugh’s confirmation. This election is a referendum on them, too.

If Democrats fail to win the 23 seats needed to capture the House, or even if they end up with a narrow majority, it will also reflect poorly on Nancy Pelosi’s leadership. She can raise money, but the minority leader hasn’t given House Democrats a governing message other than to proclaim: “I am a master legislator.”

After spending north of $120 million advocating Mr. Trump’s impeachment, you’d think Tom Steyer could get at least one new Democratic senator elected who favors impeachment. Memo to the California zillionaire: It ain’t gonna be Rep. Beto (a k a Robert Francis) O’Rourke. If Mr. Steyer fails, his vanity campaign will have imploded before it reaches the starting gate.

Some Democrats now hint Republicans may lose fewer than 37 seats—the average number the majority party has given up in midterms when the president’s approval is under 50%. “I happen not to believe that there’s going to be this great blue wave,” said Sen. Bernie Sanders Sunday. Democratic National Committee Chairman Tom Perez now says, “I don’t use the term ‘Blue Wave.’ ” Either they believe this will boost Democratic turnout, or they’re nervous and trying to lower expectations. I bet the latter.

Either way, Mr. Trump isn’t alone. The midterms are a referendum on several politicians—and all will face consequences for failure.