At Least Congress Isn’t At Fisticuffs 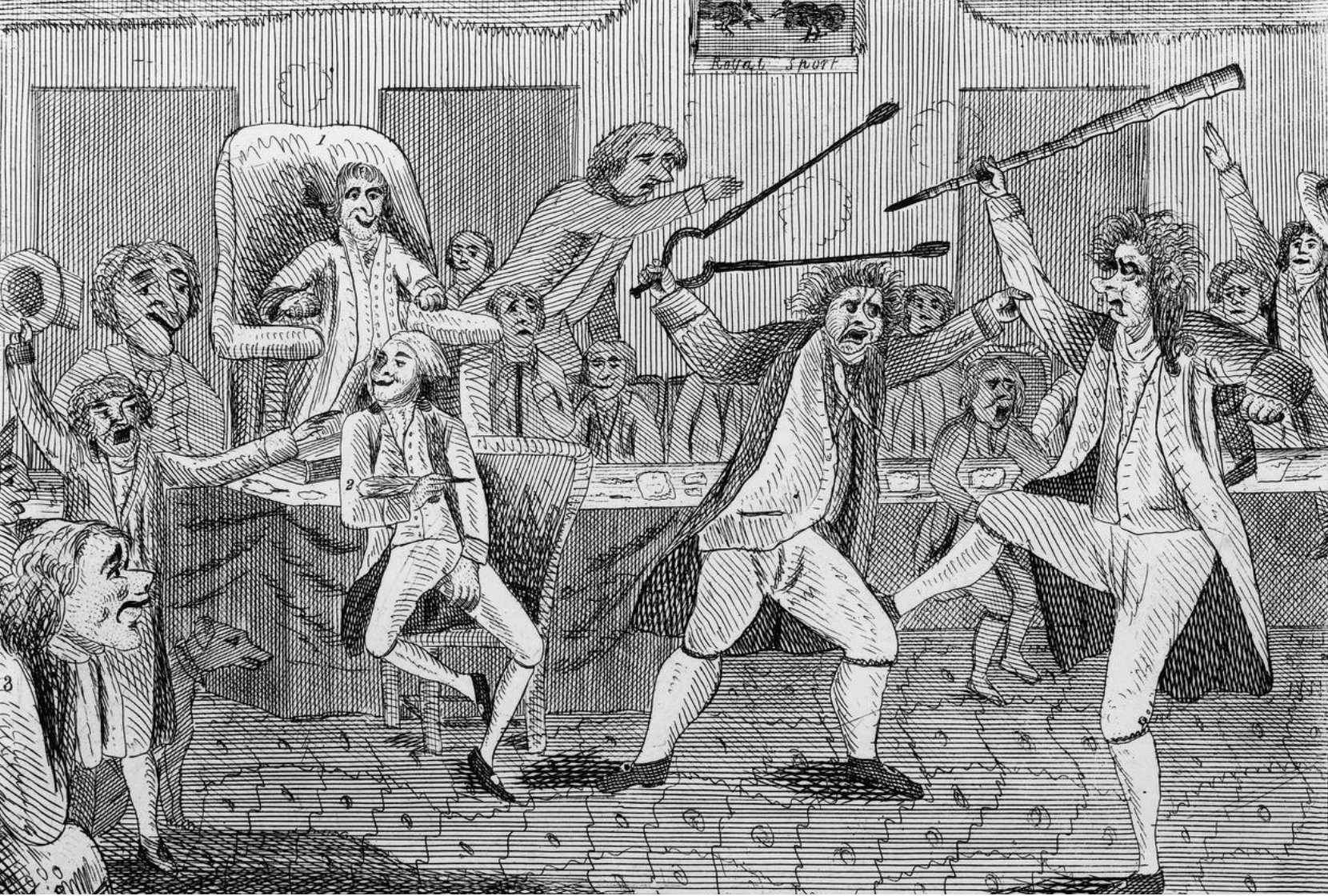 If you think American politics is confrontational and ugly today, here’s some context. Feb. 15 is the 220th anniversary of the first brawl in the House.

The seed of the fight was planted weeks earlier when Democratic-Republican Rep. Matthew Lyon of Vermont questioned the Connecticut delegation’s competence and Federalist Rep. Roger Griswold of Connecticut responded by raising Lyon’s dishonorable discharge from the Continental Army. Lyon spit tobacco juice on Griswold, who lunged at Lyon. Other members quickly separated them.

Griswold would have his revenge. On Feb. 15, 1798, he hobbled onto the floor on a hickory cane, accompanied by Virginia Federalist Daniel Morgan, a large man and Revolutionary War hero. Griswold approached his Vermont adversary, whose friends now called him “Spittin’ Lyon,” and began beating Lyon with his cane. Other representatives rushed to stop the assault, but Morgan held them at bay.

The fight was one-sided until Lyon maneuvered to a fireplace, grabbed fire tongs and began returning blows. Members appealed to Speaker Jonathan Dayton, a Federalist, but he was content to watch Griswold make Lyon pay. Colleagues separated the men but they went at each other again, before finally being pulled apart.

A motion to expel the men failed, 21-73. Lyon apologized, claiming he didn’t know the House was in session when he insulted Griswold. Neither man’s career suffered; Griswold served until 1805 and was later Connecticut’s governor. Lyon won another term in the House from Vermont before moving to Kentucky, where he was elected to Congress four times.

Tempers have again flared in Congress this year, but so far there has been no re-enactment of the Lyon-Griswold fracas. Members can make sure it stays that way by resolving the immigration issue. This may be more plausible than conventional wisdom suggests.

Public opinion points to an acceptable compromise. Take the issue of the Dreamers, brought to America illegally as children. The Jan. 19 Harvard University-Harris poll found 77% of voters, including 66% of Republicans, believe Dreamers “should be given a path to U.S. citizenship.” Other surveys have found similar numbers.

President Trump’s “wall” proposal, by contrast, polls poorly. In a Feb. 6 Quinnipiac University Poll, just 37% supported “building a wall along the border with Mexico” while 59% opposed it. But this may reflect its association with Mr. Trump. The Harvard-Harris poll found 61% say “current border security is inadequate” and 54% support “a combination of physical and electronic barriers across the U.S.-Mexico border,” which is a more precise description of the administration’s approach.

Opinion on family unification also depends on how the question is framed. Quinnipiac found that 43% of voters felt immigrants should be allowed to bring “only minor children and spouses” to the U.S. while 49% said “all immediate family members should be eligible.” By contrast, 79% told Harvard-Harris that “immigration priority . . . should be based on a person’s ability to contribute to America” while 21% said it “should be based on a person having relatives in the U.S.”

Different descriptions of the diversity visa lottery also produce significantly different responses. In Quinnipiac, 48% said people “from countries with low immigration rates” should be allowed in through the lottery, while 39% said the program should be ended. By contrast, Harvard-Harris found that 68% “oppose the lottery that randomly picks 50,000 people to enter the U.S. each year for greater diversity.”

The contours of a broadly acceptable deal are visible: Harvard-Harris found that 65% favor giving Dreamers work permits and a citizenship path “in exchange for increasing merit preferences over preference for relatives, eliminating the diversity visa lottery, and funding barrier security on the U.S.-Mexico border.” On merit vs. family reunification, Congress might adopt language limiting chain migration from the failed 2007 comprehensive reform bill. What Democrat would oppose an approach that was championed by Sen. Ted Kennedy himself?

Since restrictionists also aim to reduce the absolute number of new arrivals, the level of immigration is an important sticking point. Restrictionists should remember that economic growth relies on two factors: population and productivity. With 10,000 baby boomers retiring each day, America faces a mounting deficit of workers. If economic growth is to average 3% or more, we must keep the current level of legal immigration.

Even if no compromise is reached, congressmen are unlikely to beat one another with canes on the House floor this year. But an immigration deal would be much better than none, both as a matter of policy and to improve our political culture that seems increasingly to resemble one giant food fight.