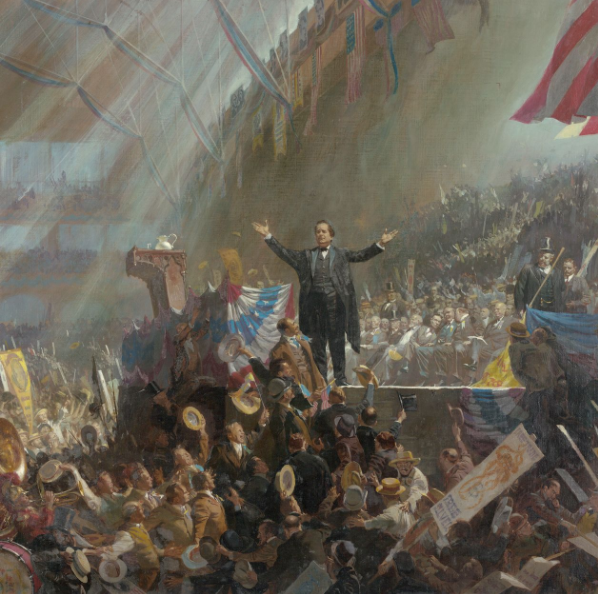 This summer the coronavirus may claim another victim: the Republican and Democratic national conventions, at least in their present form. While far less tragic than losing a human life, it would still be a significant and symbolic loss.

Since the Anti-Masonic Party held the first one in 1831—leading the major parties to stop selecting presidential candidates by congressional caucuses—conventions have taken center stage in U.S. politics every four years.

They’ve offered stunning moments: Abraham Lincoln’s selection on the third ballot at the 1860 GOP confab, crossing the threshold by half a vote; the “Cross of Gold” speech at the 1896 Democratic convention by 36-year-old former Rep. William Jennings Bryan, which so gripped delegates that they nominated him the next day; and the decision of Theodore Roosevelt’s supporters to stop participating in the 1912 Republican convention, which signaled TR’s third-party run for the White House.

There were battles over civil-rights planks at several Democratic conventions starting in 1948; riots in the streets and bitterness on the floor at the 1968 Democratic Convention in Chicago. There were surprise picks: Wendell Willkie, revealed in mid-January 1940 that he’d ditched his Democratic registration and became the Republican nominee in June. Adlai E. Stevenson, wasn’t a candidate until the 1952 Democratic convention, when President Harry S. Truman convinced him he was the only man who could keep the party from splitting over civil rights.

Conventions have morphed into three or four days and nights of televised proceedings, the culmination of day after day of platform and rules committee meetings and general socializing, fundraising and deliberating. There are dozens of speeches—including one by the skinny, long-haired College Republicans chairman (me) on Tuesday morning of the 1976 Kansas City convention, before several hundred people in the cavernous arena.

The coveted speaking spots are in evening prime time, when the hall is packed and the TV audience huge. In July 2016, 34.9 million Americans tuned in to Donald Trump’s acceptance speech the final night of the GOP’s Cleveland convention, and 33 million watched Hillary Clinton’s a week later in Philadelphia.

The big question is whether the Republican and Democratic parties can still mount these extravaganzas in a time of social distancing. The Democrats postponed theirs until mid-August, a week before Republicans, but that may not be enough. Can they prudently pack the halls with the 8,729 Democratic delegates and alternates or the 4,992 Republicans, let alone the tens of thousands of donors, political junkies, journalists and straphangers who show up?

Is there a safe way to test everyone for coronavirus? How can people practice social distancing in a raucous mob scene that rivals New Year’s Eve in Times Square and Mardi Gras in New Orleans? What’s the threat of mass infection, especially when someone might want to do it as an act of political terrorism?

Both parties must find ways to nominate their tickets, draft and debate platforms, and consider rule changes. These are, after all, the only full expression of party membership that’s available every four years. But how to do it in a time of pandemic will be a huge challenge.

Two seasoned observers, Mark McKinnon and Russ Schriefer, have helped shape programming for several Republican conventions. Both tell me it’s time to reinvent conventions as a cross between a variety show and a news program—a tight, concise miniseries, shorter than the confabs have been lately.

Mr. Schriefer suggests hosts might handle transitions between segments and lead more-intimate formats, like a moderated conversation between party leaders. There’d be fewer and shorter speeches. Platform and rules meetings would be relegated to live streaming. It took a pandemic to make Americans comfortable with videoconferencing, but public figures and entertainers could Zoom or satellite in from wherever they are.

Still, how do parties re-create the energy that comes from a revved-up auditorium that gets shared with the viewing audience? Floor demonstrations and reaction to major speeches give the country’s voters a palpable sense of a party’s enthusiasm.

Though both candidates need large audiences for their acceptances, it’s especially important for Joe Biden. The convention will be his first general-election appearance. He needs the “bounce” in postconvention polling that successful, exciting candidates get.

Covid-19 is changing U.S. politics, and the conventions were getting long in the tooth, anyway. Their reinvention will be a test of each party’s leadership in both communicating its message and responding to a pandemic.