Zelensky Defines Courage in Our Time 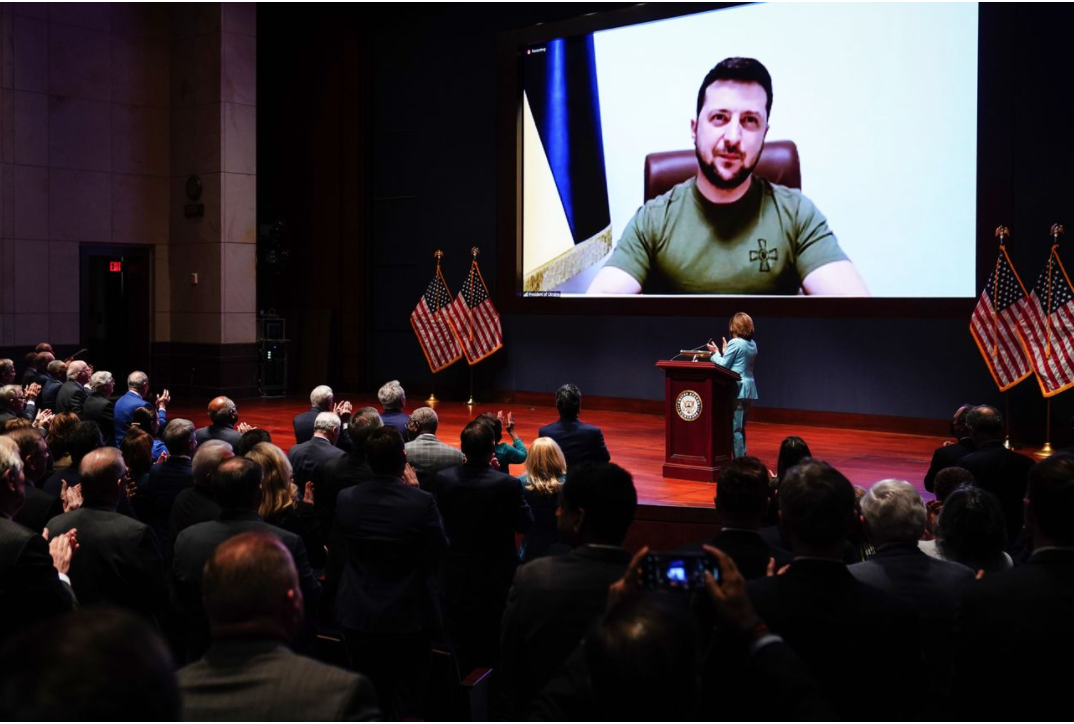 Americans have seen foreign leaders speak to Congress before, but Wednesday’s address by Ukrainian President Volodymyr Zelensky was unique.

There he was, on the other side of the world, in a green T-shirt, reading from a script in Ukrainian as a woman translated his remarks into English. No teleprompter, none of the energy that comes from being in the room.

Still, it was an extraordinarily powerful historic moment. You could not remain unmoved by his simple, direct appeal. “The destiny of our country is being decided,” Mr. Zelensky said, framing Ukraine’s struggle as a defense of democracy, independence and freedom.

He expressed gratitude for U.S. generosity, but made urgent appeals for more—a no-fly zone, air defense systems, combat jets, more sanctions, withdrawal of all American companies from Russia, the closing of U.S. ports to Russian trade.

Then an emotionally compelling and heart-rending video played of the violence and mass death Russia is inflicting on the Ukrainian people. Mr. Zelensky closed by speaking in English, calling for continued U.S. leadership to “keep justice in history.” He received a standing ovation from Congress.

More powerful than words to Congress, however, has been Mr. Zelensky’s heroism and that of the Ukrainian people. Outgunned and outnumbered, they’ve fought off the Russians for three long, hard and bloody weeks, defining courage for our time.

Any world leader today would suffer by the comparison, and President Biden does. To his credit, Mr. Biden has handled the crisis well, doing many of the right things, including working closely with NATO allies and supporting crushing sanctions against Russia. But Mr. Biden’s past actions likely emboldened Vladimir Putin.

Before Mr. Biden became president, Mr. Putin had been conditioned by the Obama-Biden administration’s weak response to Russia’s seizure of Crimea in 2014, which involved imposing modest sanctions but refusing to arm Ukraine. Mr. Putin’s attacks on civilians during Syria’s civil war, starting in 2015, in support of the brutal Syrian leader Bashar al-Assad, were met with only light sanctions levied by the U.S.

Once Mr. Biden assumed the presidency, he discarded a powerful geopolitical advantage—America’s energy independence—by canceling the Keystone XL pipeline, halting leases for drilling on federal land and waters, restricting access to capital for oil and gas companies, and piling on regulatory burdens. Mr. Putin must have been amazed by the U.S. squandering such a huge edge.

Then on May 19, 2021, the Biden administration removed sanctions on Russia’s Nord Stream 2 gas pipeline to Germany, which had been imposed by President Donald Trump, without concessions from Russia. Mr. Biden renewed sanctions late that summer, but he had already sent the wrong signal.

Then, before a mid-June summit between the two leaders, Mr. Biden paused a $100 million military aid package to Ukraine, signaling again to Mr. Putin a lack of American resolve. It took until September for the U.S. to restart military assistance to Ukraine—and even then, a bipartisan group of senators criticized the package as inadequate.

Perhaps the most damaging thing Mr. Biden did was his abject surrender in Afghanistan. Mr. Putin was probably astounded that with the country stabilized and only a minimal residual force remaining, America would abandon it to the Taliban. Such things get noticed in the Kremlin.

Despite Mr. Biden’s capable handling of the response to Russia’s invasion of Ukraine, his earlier actions may have already diminished him in the eyes of Americans. A Washington Post-ABC poll, issued Feb. 24, as the Russians invaded Ukraine found that only 36% of Americans said Mr. Biden is a strong leader while 59% said he wasn’t. That’s dangerous territory for any president, especially only a year into his term.

For now, the spotlight rightly is focused not on the American president but the Ukrainian president. A former comedian who came to office almost by accident, he’s now entered the pantheon of great wartime leaders. His words and personal courage have stirred the world to action. Whatever fate awaits him and his nation, those who watched Mr. Zelensky’s address to the joint congressional session won’t soon forget it. It was a privilege to see a leader in whom honor is personified. The least we can do is have his back.