As the new year begins, the Real Clear Politics polling average shows President Joe Biden’s job approval is at its lowest point since he took office last January. The RCP presidential job approval weights all publicly published polling to calculate the overall average. Biden’s low of 54% disapproval is a half point lower than his previous disapproval record of 53.5%. 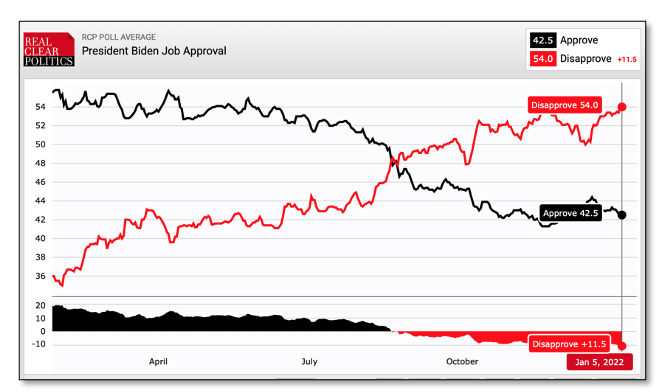 Biden reached that 53.5% disapproval mark in Nov. 2021 following the Republican sweep of Virginia’s off-year elections. It’s close to the worst disapproval level of President Obama in Dec. 2013, when the then-President hit his all-time RCP average low of 55.9%.

The new low shows memories of the past year’s policy failures carried over to the New Year and should be a major concern for a White House that was hoping to turn the page going into the midterm elections. It comes as COVID-19 surges and testing lines wrap around blocks, as gas prices remain high, and as inflation – once branded transitory – continues.

With midterms now just over 10 months away and the net generic Congressional ballot trending toward Republicans (currently R+1.6), the GOP is set for a banner year in 2022. By capitalizing on America’s declining faith in Democratic leadership, Republicans have a clear path forward to retake the majorities and rein in the excess of the Biden Administration.