Fivethirtyeight.com compared each of the twelve candidates’ pre-debate favorability rating to a sample of debate-watchers’ rating of their performance to see if any candidates under-performed during the debate, or if any unpopular candidates exceeded expectations.  While Amy Klobuchar and Pete Buttigieg were two candidates that exceeded expectations, Elizabeth Warren still received the highest debate grade overall. 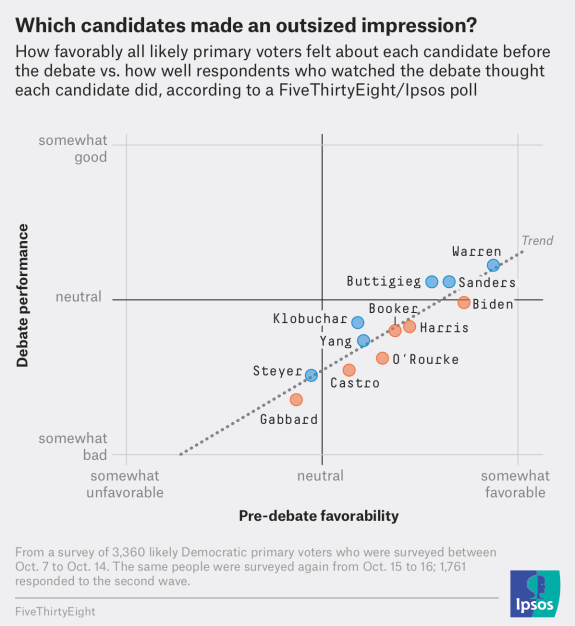 Were the positive ratings because of the issues discussed or because some candidates seemed more electable?  Going into Tuesday’s debate, over two-thirds of Democratic voters said they want a candidate who can beat President Donald Trump.  The debate performances did not change that sentiment.  Fivethirtyeight.com looked at whether electability or issues mattered to debate watchers.  Ms. Warren scored well with voters who were more concerned about issues, but also led with those who prioritize electability as well.  Mayor Pete did not have the highest rating with those focused on issues, but was second among those who wanted someone who could beat Mr. Trump.  Sen. Bernie Sanders also performed well on both counts and Joe Biden, while he did not rank in the top three with those concerned about issues, nearly matched Ms. Warren among those concerned about electability.

The Democrats on stage mentioned Mr. Trump’s name twice as much as they did in the previous debate suggesting the candidates understand that while Democratic voters believe issues are important, they are more concerned about getting a standard bearer who can beat Mr. Trump. 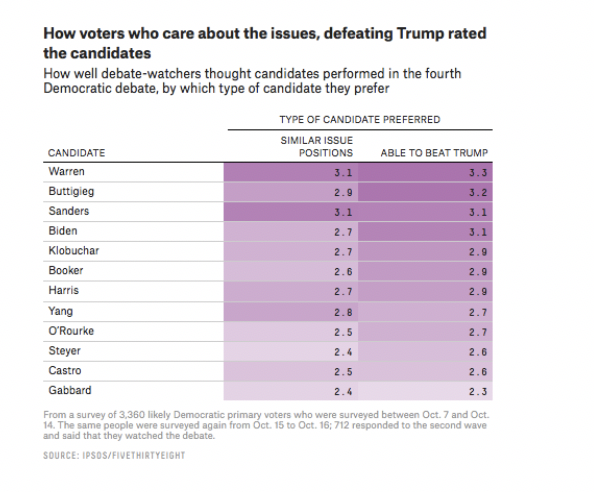