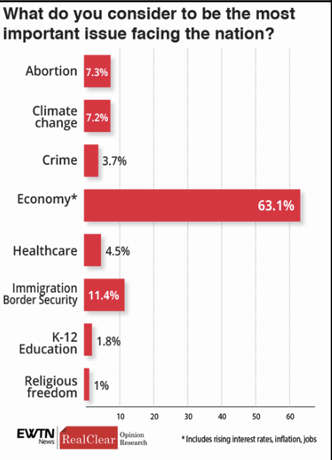 WHY IT MATTERS: Catholics make up roughly 1/5 of the U.S. population. Even though Catholic voters are traditionally split, they’re expressing disapproval in their fellow Catholic, President Joe Biden, and deep concern for the economy. This combination is driving Catholic voters out to vote and toward Republicans. By the numbers:

Senate Gains: Polling in the key battleground races in Arizona, Florida, Georgia, Nevada, Ohio, and Pennsylvania also showed a majority of Catholic voters favor the GOP Senate candidates in their respective states. The same was true for Governors in all the states except Pennsylvania.

The unity of Catholic voters around kitchen table issues like inflation and the economy makes it clear that Republican messaging on the handling of these issues by the Biden Administration is resonating with voters.

The Bottom Line: Republicans are hitting their stride in the final weeks, and gains with this key voter group is evidence of that movement. If a majority of Catholic voters stand with the GOP in less than two weeks, Republicans may win majorities in both houses of Congress.