Former President Trump made a point of flaunting the win rate of his endorsed candidates; however, an American Enterprise Institute study shows that in close races, his endorsement was not of great service to candidates. In most competitive races, Trump-candidates performed below expectations relative to non-Trump backed peers. 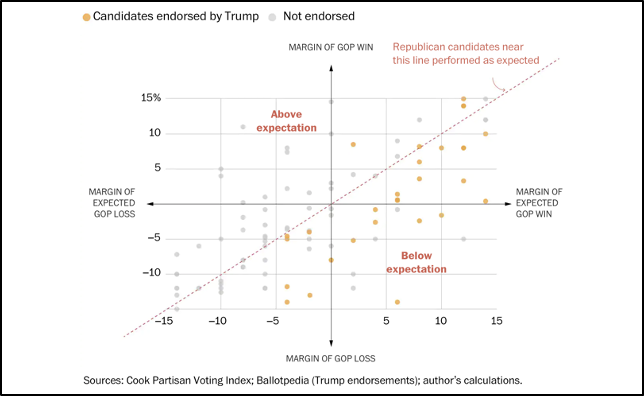 The AEI study set a trend line based on the Cook Political Report’s Partisan Voting Index (PVI), using a district’s PVI of the district as the expected performance. In 114 Congressional Districts where the race was won or lost by 15 points or less, Mr. Trump endorsed in 26 of these competitive races.  Twenty-two Trump-endorsed candidates in competitive races (84%) fell below the trend line of expected performance, 13 Trump-backed candidates in competitive races (50%) lost and of the 13 Trump-backed hopefuls who won, 9 (~70%) ran below expectations.

A Pennsylvania Case Study: In Pennsylvania’s CD 8, Democrat Cong. Matt Cartwright faced a challenge from Trump-backed Jim Bognet. The race was predicted to be tough for Cartwright, whose district PVI grew from an R+1 to R+4. However, Cartwright defeated his GOP opponent by almost 3%.

Michigan Margin: In a race rated D+1, it was expected to be close for Democrat Hillary Scholten against her Trump-backed opponent, John Gibbs. In the Republican primary, Gibbs had defeated incumbent Peter Meijer, one of 10 GOP Congressman to vote to impeach the former president. Gibbs lost the general election by over 12 points.

Bottom Line: Former President Trump’s endorsement may well have been a major source of weak performance for Republicans; the true power of an endorsement is in the meaningful general election wins it delivers.  In close races, it’s clear that those with the Trump endorsement were not granted a great advantage by it at the end of the day.