Tuesday saw a historic sweep for Republicans in Virginia, where outsider Glenn Youngkin pulled off a come from behind victory over former Democratic Gov. Terry McAuliffe. While a few votes remain to be counted, Youngkin has 50.9%, with the former Democratic governor trailing at 48.4%. Exit polling from NBC News shows that Youngkin’s campaign expanded the reach of Republicans into groups that had not previously been part of the GOP coalition when compared to 2017 exit polls.

Turnout shifted with 52% of those voting being women, up from 49% in 2017, and 48% men, down from 51% in 2017. Youngkin made gains with both genders, winning 46% of women compared to 2017 GOP gubernatorial Ed Gillespie’s 39%. Among men, Youngkin performed six points better than Gillespie, winning 56% among male voters.

Youngkin’s most significant gains over the Republican performance in 2017 came among white and black women. Among both categories, the businessman-turned-Governor-elect won 6% more of the vote share than Gillespie did.  Youngkin won 57% of white women (37% of the overall electorate) and 14% of black women (9% of the overall electorate). While full data is not available across all demographics for both elections, it’s worth noting Youngkin won 23% of Latina women voters. 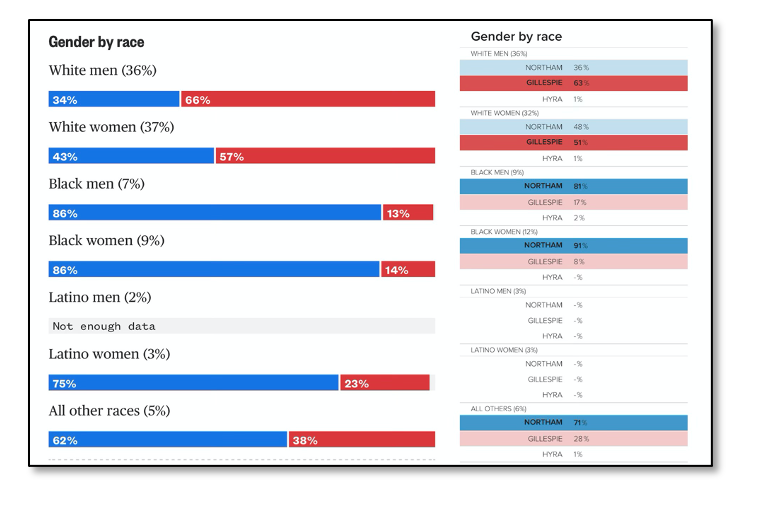 From a geographic standpoint, Youngkin made gains across all regions of Virginia, pushing turnout to a level that gave the future 74th Governor of Virginia the highest vote totals in the history of the Commonwealth’s gubernatorial elections. He made significant gains in the D.C. suburbs, winning 36% compared to Gillespie’s 30%. He saw six-point gains across the board, winning Central Virginia with 59%, the Mountain regions with 70%, and winning a draw in the Richmond/Southside area, with 50% of the vote.  Youngkin’s geographical game-winner was in his home region – the populous Hampton Roads area – where he outperformed Gillespie by 9%, winning 46% according to exit polls. 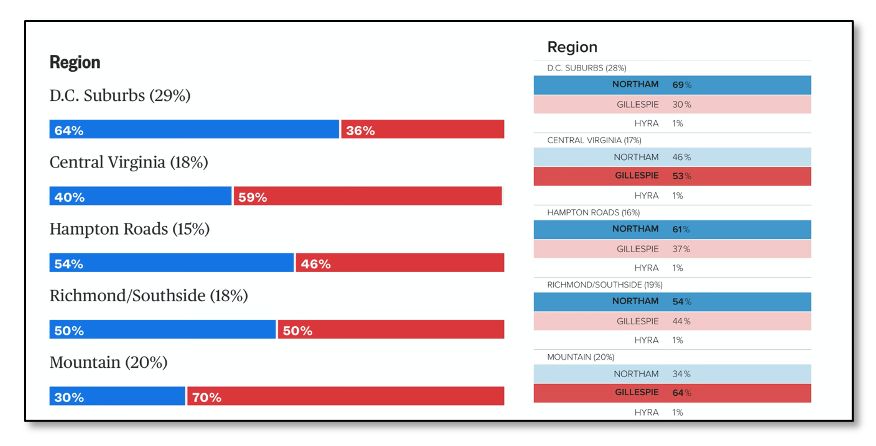 National Republicans can view Youngkin’s campaign and messaging as a masterclass in how to win by energizing the 2020 Republican base while expanding into a new electorate through messaging on a common-sense conservative agenda and by maintaining a positive, upbeat tone. The happy-warrior archetype embodied by Glenn Youngkin had a demonstrable effect on building and preserving his favorable, trustworthy image that withstood harsh Democratic attacks.