Does Republican leadership at the state level work better? Recent polling from Morning Consult show that nine out of the ten approval ratings for most popular governors are Republicans.  At the top of the list are Vermont’s Phil Scott, with 79% approval, Massachusetts’ Charlie Baker with 72%, and Maryland’s Larry Hogan with 70%.

Other Republicans in the top ten include New Hampshire’s Chris Sununu with 67% approval, Wyoming’s Mark Gordon at 66%, West Virginia’s Jim Justice at 65%, Alabama’s Kay Ivey at 62%, Ohio’s Mike DeWine at 62%, and Utah’s Spencer Cox at 62%. The lone Democrat in the top ten is Connecticut’s Ned Lamont with 64% approval. The weakest governors include seven Democrats and four Republicans. Democrats in this group include Nevada’s Steve Sisolak and Michigan’s Gretchen Whitmer, both with 50% approval, Wisconsin’s Tony Evers at 45%, and Oregon’s term-limited Kate Brown, with the lowest approval of any Governor today at 43%. 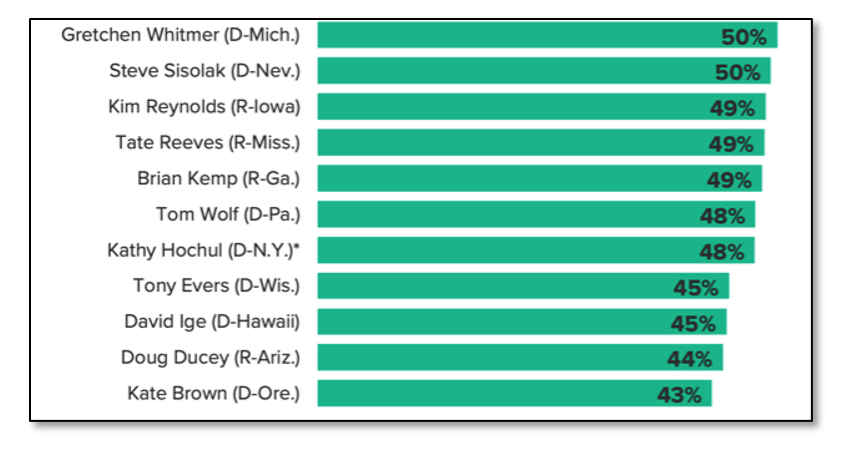 A majority of the nation’s governors are Republicans—soon to be 28 of 50. The lesson from the 2021 upset for Democrats in Virginia—and the close finish Republicans had in New Jersey— is that Republicans win with a focus on issues that matter to voters. In 2022, Republicans can hold onto and expand their number of governorships if they study the Virginia victory and the work being done by the nation’s popular GOP governors.