According to Gallup, President Donald J. Trump’s approval rating has been relatively stable over his first two years.  His approval rating has varied from 35% to 45%, a range of ten points, the smallest for any president during their first two years.  Richard Nixon saw the second smallest range, 17-points, with approval running between low job 51% and 67% during his first two years. Lyndon B. Johnson had the next smallest range of 17 points (62%-79%), followed by Dwight Eisenhower (18 points), John F. Kennedy and Bill Clinton (22 points), Barack Obama (24), George H. W. Bush (26), Ronald Reagan (31), Gerald Ford (34), Jimmy Carter (36), George W. Bush (39), and Harry Truman (54). 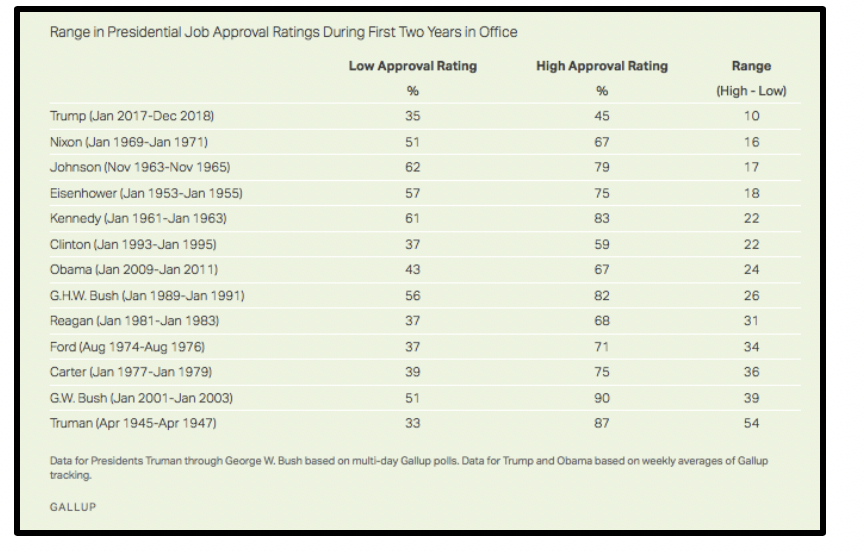 Gallup says presidential job approval ratings have grown increasingly polarized over the last twenty years.  However, Mr. Trump’s ratings have been some of the most polarized in Gallup’s history.  When he took office, the Democratic base stood strong against him and the Republican base was solidly in line behind him.  Considering the political climate, the coming Democratic presidential primary campaigns and the unlikeliness of each base to shift, it is doubtful the president will see a sharp improvement in his Gallup approval rating that would push it above 45% in the foreseeable future.

Election Intent and Perception During Pandemic

Polling News
Despite partisan fear-mongering over how the COVID-19 pandemic could impact the November election, most voters feel they’ll be safe when voting. ...
Read More
Share on:

Polling News
During a sustained period of heightened polarization, majorities of both Republican and Democrat voters have retained their party registration. ...
Read More
Share on:
“
yeah, that’s about right https://t.co/4BhxaxjnQs
”