Now that the Democratic impeachment effort has come to a close and voters finally begin moving on from 2020 and looking forward to 2022, some have speculated on the possibility of a third party emerging on the national stage.  However, a recent FiveThirtyEight.com post acknowledged this is unlikely, noting that previous attempts in American history have rarely been successful. 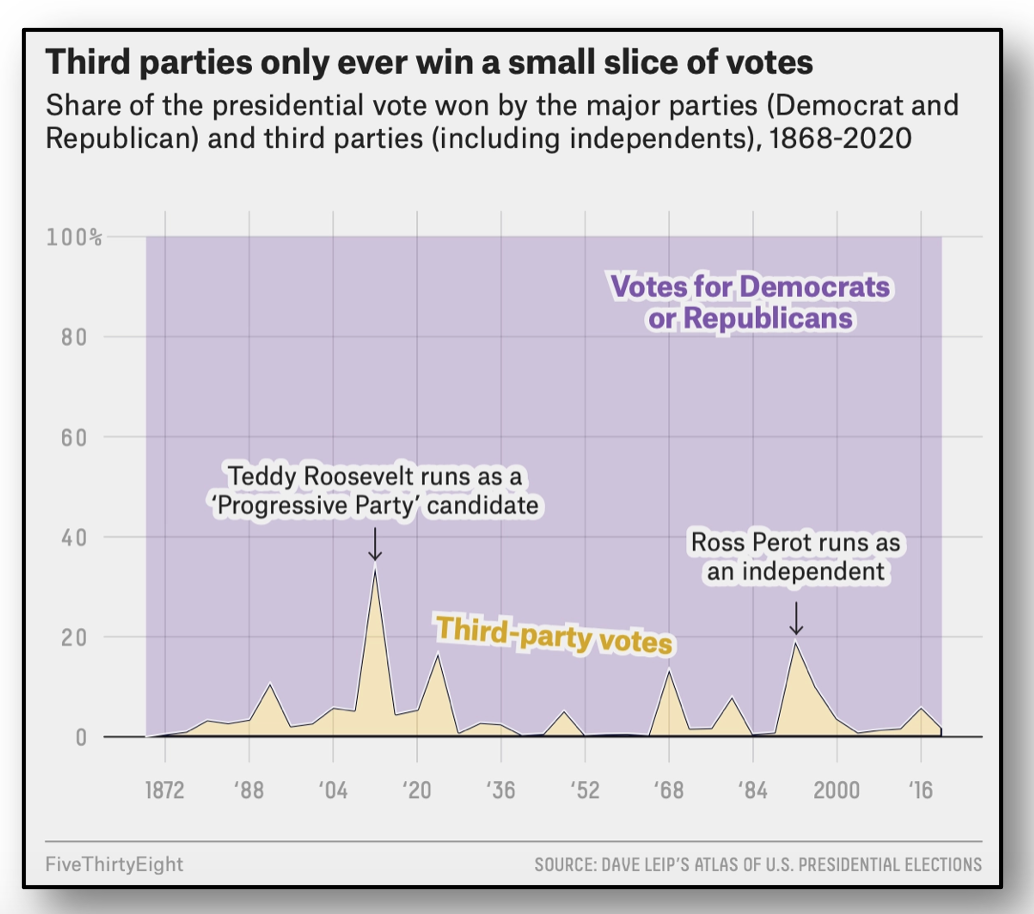 Looking at presidential elections from 1868 through 2020, a third party has never hit a significant share of the overall vote.  Teddy Roosevelt came the closest in 1912, but even then, he only received 27.4% – and that was after already serving seven years as president.  Ross Perot did not hit 20% in 1992 but pulled enough from the incumbent president, George H.W. Bush, to send Arkansas Gov. Bill Clinton to the White House.

For a third-party effort to succeed, a large swath of voters from both major parties would have to defect and join together, as was the case in the creation of the Republican Party.  FiveThirtyEight notes that past third parties have resulted from inner-party schisms or irreconcilable dissatisfaction with the existing parties. Considering approval of one’s own party is relatively stable among both Republicans and Democrats, such a meltdown of both parties is unlikely. Both Republicans and Democrats must deal with internal factional differences, but to assume this would lead to a viable third party is blog headline fodder today.

Polling News
Public confidence in the economy continues declining, according to the Gallup’s January tracking. ...
Read More
Share on:

Polling News
Voter turnout soared in the 2020 General Election, up seven points from 2016 turnout as nearly two-thirds of eligible voters cast a ballot. ...
Read More
Share on:
“
Good advice, but something tells me Senate Dems won’t do this: they want lots of taxpayer money to spread around. |… https://t.co/AXGwignZ5h
”