Democrats jammed through a gigantic high-sugar spending bill under the title of “COVID-19 relief,” while not coming to the table to help Americans or keep our debt low.  A new CNN poll found their approach has worked so far, with specific elements of the COVID-19 relief bill being widely popular.

The poll found 85% favor “providing larger tax credits for families and making them easier for low-income households to claim;” 77%“providing nearly one hundred and thirty billion dollars to K through twelve schools to help students to return to the classroom;” 76% favor “sending stimulus checks worth up to $1,400 per person to most families and individuals;” and 59% favor “providing $350 billion dollars in aid to state and local governments, as well as tribal and territorial governments.” 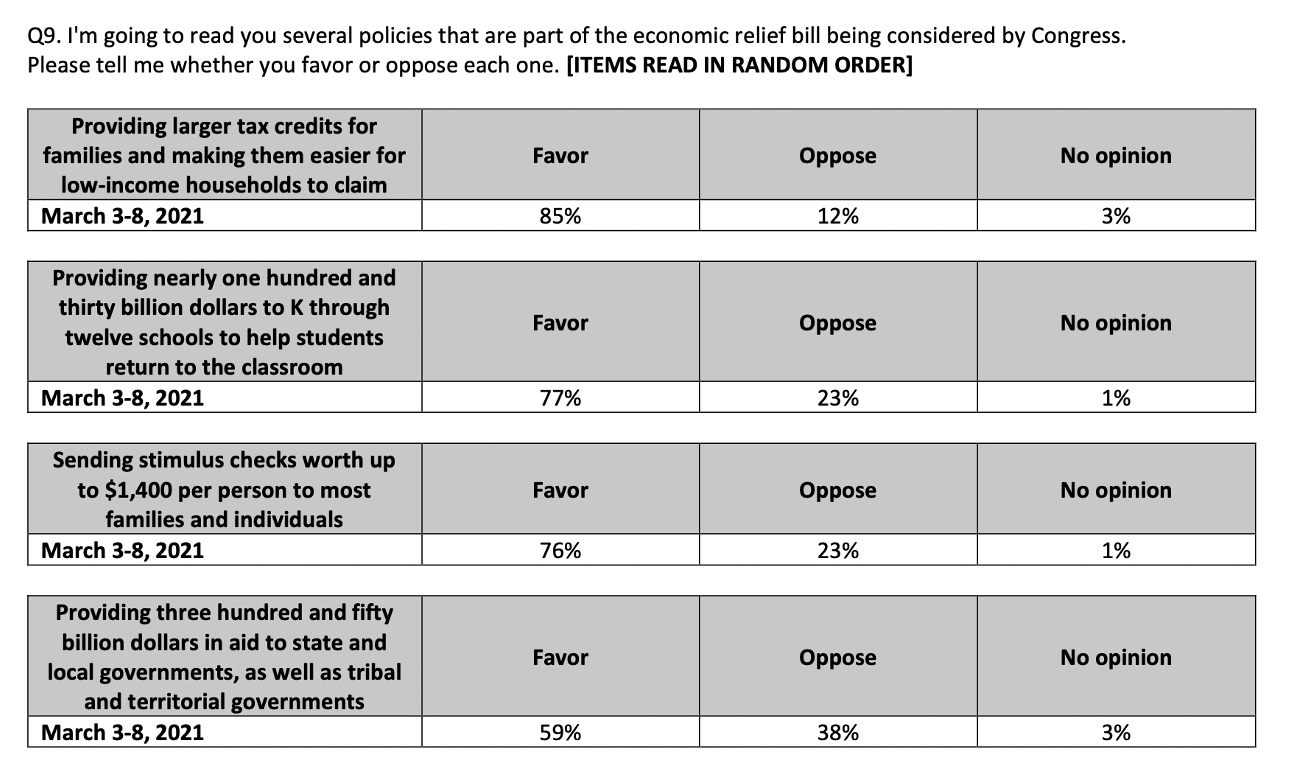 What CNN didn’t ask was how Americans feel about the levels of irresponsible spending and the mounds of debt it’ll add on their children and grandchildren.  Democrats resisted every effort to keep this bill to COVID-19 related issues, used formulas that pay blue states and cities more than red states and small towns, and refused to stop grants to sanctuary states and cities. They give checks to 75% of Americans instead of just those most in need and checks to felons in prison.  Senate Republicans focused on education and tried to cover the cost of opening schools and vaccines – Democrats shot it down.

The CNN poll also showed only 49% approve of President Joe Biden’s handling of the economy, while 44% disapprove.  So as Americans learn this newest spending bill’s details, disapproval is likely to grow as voters come to understand how much needless spending, carve-outs and special privileges it has for Democratic interest groups.

Polling News
In 2020, the “Defund the Police” movement reached its peak, with radical leftists and their allied progressive groups calling for aggressive cuts in police funding. ...
Read More
Share on:

Polling News
After ten months of the Biden Administration growing government and pressing a massive expansion of the welfare state with its $5 trillion “human infrastructure” proposal, Americans now favor a more limited role for government. ...
Read More
Share on:

Polling News
As Congress debates the debt ceiling, the bipartisan infrastructure bill and the Administration’s “Build Back Better” package, Americans are growing impatient with the lack of progress. ...
Read More
Share on:
“
uh-oh https://t.co/185sDt3umS
”