According to a new HuffPost/YouGov poll, 77% of Democrat and Democrat-leaning voters believe Joe Biden will be the Democratic presidential nominee.  Barely half, however, are excited about it.  Forty-eight percent of Democrats and Democrat-leaners say they’d be excited to have Mr. Biden as the nominee.  Bernie Sanders does not fare any better.  Only 40% say they would be enthusiastic about a Bernie Sanders’ nomination. 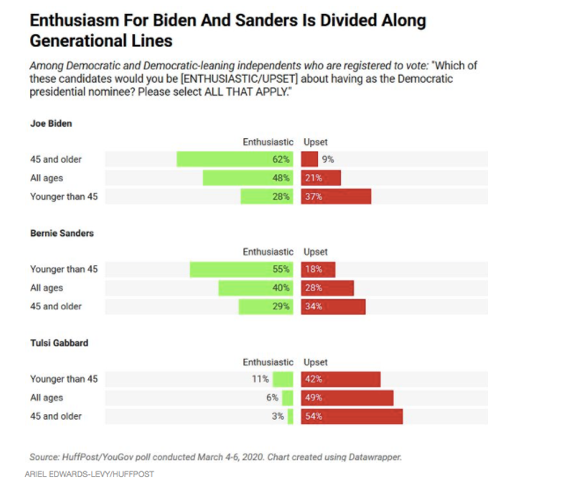 While it looks like the Democratic primary contest is settling a winner, it will take time and work for the eventual nominee to excite the party as a whole.  Mr. Biden will start at an enthusiasm deficit compared to President Trump.  While he was not included in this poll, the president’s approval among Republicans hovers around 90% and turnout for Republicans in the presidential primaries has exceeded past incumbent performances, both signs that the Republican Party is excited about sending the president to a second term and behind him enthusiastically.  It will be interesting to see well Mr. Biden uses the balance of the primary season and the Democratic National Convention to unite, motivate and enthuse his party before the fall election.