President Joe Biden is still enjoying somewhat of a post-election honeymoon, according to Gallup.  As Mr. Biden reaches his 100th day in office, his Gallup approval rating stands at 57%.  This is slightly lower than the approval rating that most presidents in the last 70 years saw on their 100th day in office.  Presidents John F. Kennedy was at 83%, Dwight D. Eisenhower at 73%, Ronald Reagan at 67%, Barack Obama at 65%, Jimmy Carter at 63%, George W. Bush and Richard Nixon at 62% and George H.W. Bush at 58% on their 100th day.  Only Presidents Donald Trump (41%) and Bill Clinton (55%) saw lower approval ratings in Gallup at this point in their first year.

President Biden is well-liked among Democrats (94%), non-white adults (81%), women (64%), younger voters and college graduates (both 60%) and Independents (58%).  Approval lags with Republicans (11%), white adults (45%), men (50%), and non-college graduates (53%). This isn’t surprising – Mr. Biden took office during a divisive time and hasn’t delivered any of the bipartisanship he promised.  He’s also providing a lot of what he didn’t warn us about – huge spending increases, big bump-ups in the debt, crushing tax hikes, and a bungled response at the border.  Should this persist, his Gallup approval– especially among Independents, college graduates, and women – is likely to fall, especially if Republicans get a positive message to go along with their criticism of Mr. Biden’s aggressive left-wing agenda. 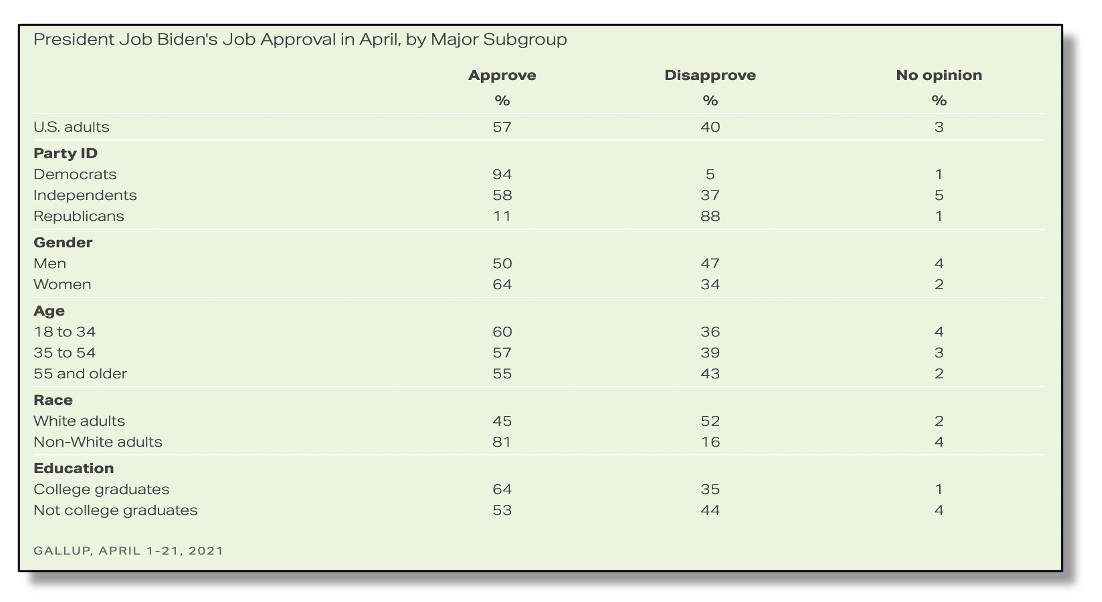 Polling News
An average of 49% of Americans identified as Democrats, according to Gallup’s first quarter average polling. ...
Read More
Share on:
“
https://t.co/rNpmehLNyb
”