As states begin opening and the country moves into recovery from the COVID-19 pandemic, partisanship is still ever-present, as Democrats hit Pres. Donald Trump for his handling of the response and Republicans hold Democrats responsible for going too far on restrictions in blue states and holding up relief efforts in Congress.  China is the bipartisan villain, however, according to latest data from the Pew Research Center.

Overall, two-thirds of Americans have an unfavorable view of China, the highest it has been since Pew began tracking this question fifteen years ago.  A majority of both Republicans and lean Republicans (72%) and Democrats and lean Democrats (62%) have unfavorable views of China.  Additionally, a majority of Americans with college degrees (68%) and without college degrees (64%), ages 18-29 years old (53%), ages 30-49 years old (67%), and over 50 years old (71%) do as well.

The Communist Chinese government cost the rest of the world months in planning and preparation for the Wuhan pandemic.  When the first outbreaks began and Pres. Trump halted travel to and from China, the Left attacked him and said he was going too far.  Now, they say he hasn’t done enough.  Republicans do not need to have that fight.  As campaigns find their messaging during this time, the data shows there is a national consensus that China is a bad actor.  Republican campaigns, even in more moderate districts, can lean into this and incorporate it into part of their messaging about how their communities can recover economically. 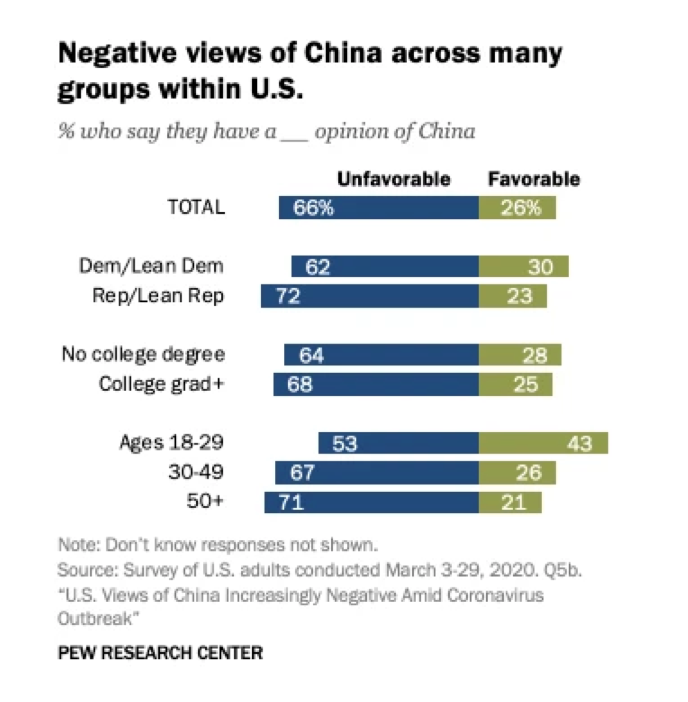