One week before President Donald Trump officially launches his reelection, a Morning Consult/POLITICO poll found that only two of the large field of Democrats running lead him in a head-to-head match-up.

The poll found that 44% of voters would vote for former Vice President Joe Biden and only 33% would support Mr. Trump.  In a Bernie-versus-Trump match-up, 42% side with Sen. Bernie Sanders and 32% support the president.  The other five Democratic candidates tested are in weaker positions.  Sen. Elizabeth Warren trails the president 32% to 33%; Sen. Kamala Harris trails 30% to 33%; Sen. Cory Booker and former Rep. Robert Francis O’Rourke both trail the president 28% to 32%; and Mayor Pete Buttigieg trails 27% to 31%.  About a quarter of voters are undecided in both a Biden-Trump and Bernie-Trump match-up, whereas about 40% of voters are undecided in the match-ups between the president and the other five Democratic candidates.

While it is too early to read much into these numbers, Morning Consult pointed out that a 2011 Fox News poll showed President Barack Obama leading every possible GOP contender in June 2011, including the eventual Republican nominee, Mitt Romney (who trailed Mr. Obama by seven points).  While Mr. Trump’s standing today may not be as strong as previous incumbents at this point, the high number of undecided voters could indicate that they are up for grabs and as skeptical of some of the possible Democrats as they are of the incumbent.  As Democrats prepare for their first debate, Republicans must document and hold the Democrats accountable for extreme positions taken by their candidates for that party’s nomination. 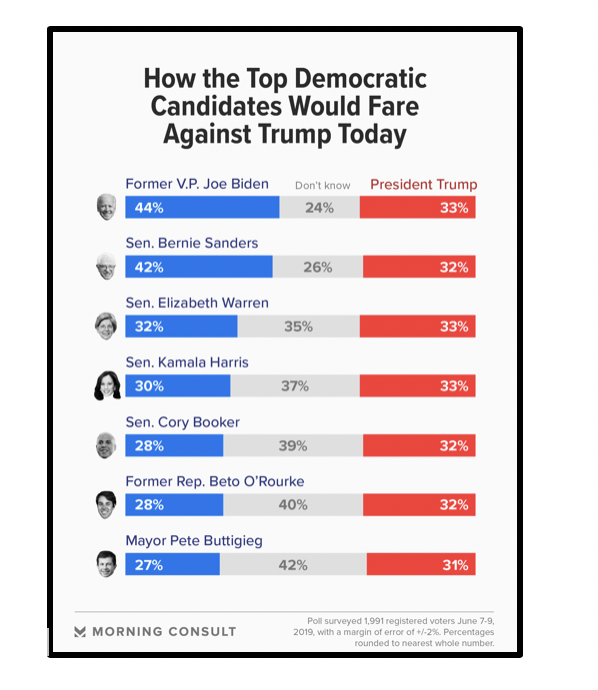