The July 2021 Small Business Economic Trends Survey conducted by the National Federation of Independent Businesses (NFIB) found optimism among business owners is declining, influenced by two-to-four-month lows in sales, prices, projections, and inventory measurements.  The NFIB Optimism Index uses ten factors from its monthly survey to determine the overall level of optimism about the future among business owners.  Since the start of the COVID-19 pandemic, the Optimism Index crested at 104.0 in October of 2020, took a post-election fall to 95.0 in January, but began trending up until July 2021, where it slipped from 102.5 to 99.7. 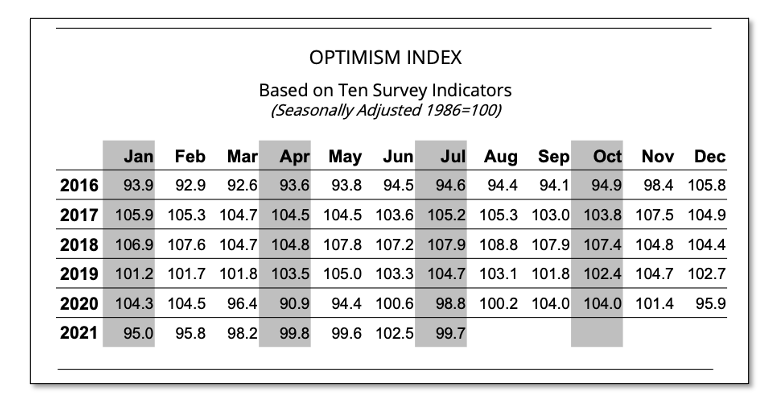 One possible reason for the decline might be continuing labor shortages.  As of July, 49% of business owners had positions open they couldn’t fill, the highest number of such employers with open positions in at least 67 months.  Looking at business owners reporting few or no qualified applicants to fill positions, this was the highest in the last six years.

Another possible cause of the poor outlook is a material/production shortage.  Fifty-six percent of business owners reported a decrease in actual inventory available, the lowest since December 2020.  This shortage of materials being felt across the nation is resulting in price increases on both raw and processed goods.

Another factor in the slide in optimism is that amidst a “recovery,” 63% of employers report lower earnings in the last three months, the worst report since March.  Almost 2/3 of business owners are making less, which means there is less to be reinvested in communities in taxes, wages and charitable contributions. 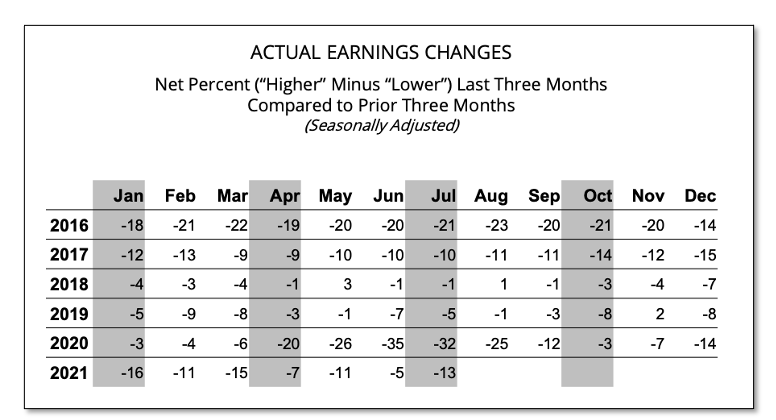 The economy doesn’t dominate every election, but the longer the economy remains stagnant or falters, the more pressing an issue it becomes to voters.  Conservatives hoping for a big 2022 should look to what economic messaging can move voters. Both the economy and the Biden Administration numbers on its handling of it are unlikely to get much better and could get must worse, with a big impact on Democratic changes to hold the Congress next year.  But GOP candidates will need an agenda and message of their own to maximize their gains.