A recent Gallup poll looked into reasons why Americans' broad satisfaction with the direction of the U.S. has increased the last few months.  According to Gallup, 35% of Americans are satisfied with the way things are going in the country.  Since Gallup first asked the question in 1979, the historical average has been 37%, but today’s number is higher than the average in 2017 (25%) and near the peak level of satisfaction during President Barack Obama’s first year in 2009 (36%).

Gallup notes the economy is “Americans’ top response when asked to name the ‘most important thing that is going well’ in the U.S. today.”  The distant second was “Social climate/Civic participation/Resistance” (17%), followed by “Nothing well/Nothing much” (12%), and “National conditions” (11%).  This lack of economic anxiety underlines the positive view of the country today but also means voters are apt to overlook their improved economic circumstances and turn to other issues. 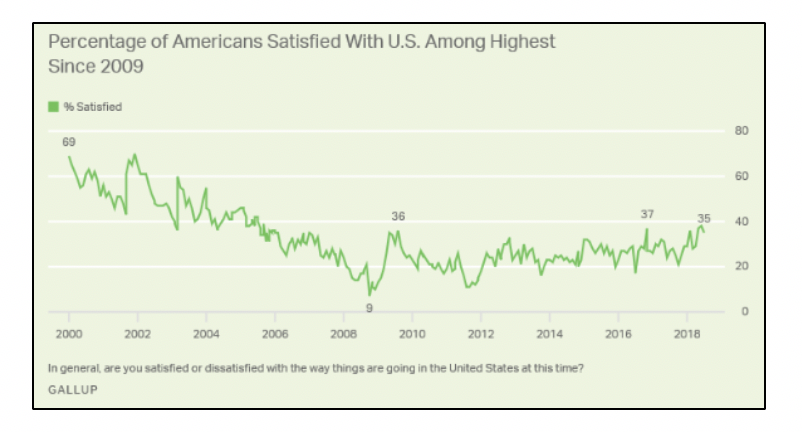 This disparity will play out in November, but if Republican candidates focus on the positive accomplishments of their party and what their voters are concerned about today – issues like education and health care, for example – they will have a better shot at attracting independents and swing voters over Democrats who focus on the “Resist” culture that party’s left-wing fringe base prioritizes.