President Joe Biden’s job performance is down for the first time of his presidency, according to an Aug. 16th Reuters and Ipsos poll. Only 46% of Americans approve of the job he’s been doing, while 47% disapprove. It’s a steep fall from where he stood just three days earlier, when his approval rating stood at 53%.

There is one close historic parallel – President Gerald R. Ford. Ford came into office under extraordinary circumstances following the resignation of President Nixon. The issues he faced early in office were not dissimilar to those faced today: a depressed economy, rampant inflation, and a long-standing foreign conflict, that time in Vietnam.

Historical data collected on approval ratings by Gallup shows that when Ford took office, he held a 71% approval rating. That’s significantly higher than President Biden’s day one rating of 53%. On Apr. 18, days before his declaration of the end of the war, Ford held a 39% approval rating and a 46% disapproval rating. Two days after the fall of Saigon, his approval/disapproval was 40%/43%. The remainder of Ford’s presidency would see an approximate average of 46% approval, but there was never a full recovery. He would go on to be defeated in 1976 by Georgia Gov. Jimmy Carter.

Commentators have been quick to circle wagons around President Biden, arguing that there is no reason to believe his numbers or presidency will permanently suffer from the Afghanistan pull out. But there are a few important data points that suggest Mr. Biden may well suffer. Gallup polling from the Vietnam War era shows that by 1971, 60% of Americans believed sending troops to Vietnam was a mistake. Years of drafts, political conflict, and the seemingly endless cycle of lists of names being read on the evening news in towns across America had taken their toll on public opinion. Overall, leaving the conflict was one of several factors that led to Mr. Ford’s two years after Saigon’s fall. 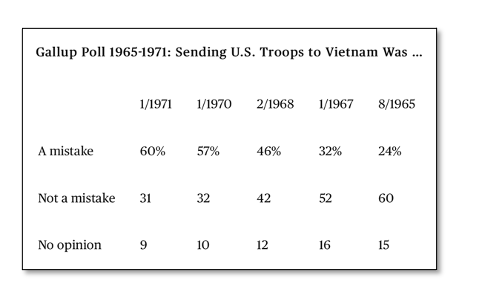 The Afghanistan conflict has very different origins and levels of public support than the Vietnam War did. At the outset of deployments of troops in 2001, Gallup showed approval for U.S. involvement was 89%, and crested at 93% that same year. It has gradually decreased to a current level of 46% approval and 47% disapproval. With a history of general majority support for having troops in Afghanistan, the total withdrawal and resounding media storm could do even more damage to Mr. Biden than Vietnam did to Mr. Ford in the long term. 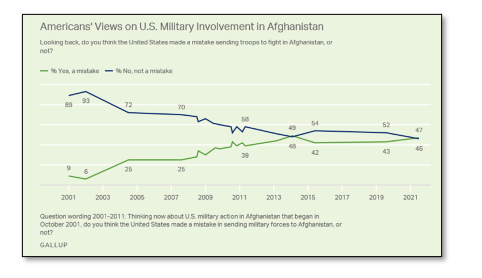 Before this week, the Biden Administration projected a sense that it had a mandate to govern, and behaved that way when it came to policy, despite having not campaigned on the agenda it’s been pursuing.  They are coming into office with even lower approval than the Ford Administration did.  With approval numbers turning downward and no clear leadership being shown to the American public as the Taliban grabs control of Afghanistan, the Biden Administration will likely see worse numbers in the next few weeks. Looking toward 2022, Republicans have a chance to capitalize on messaging and turn the tables to ensure the effects of a failed withdrawal from Afghanistan to have prolonged effect on Biden’s Presidency, but only if the GOP supports admitting its Afghan allies as refugees as we did in Vietnam. Time will tell, but contrary to the pundits today, history is not necessarily on Biden’s side.