The way we view the world is always changing, and perceptions of our economy are not immune from shifts in public opinion. Recent polling from Gallup shows the way Americans view industries is changing rapidly. The partisan divide in these shifts in perception is significant in many cases, often deeply influenced by the policies of the party that holds the White House.

Overall, public opinion of the healthcare, oil/gas, electric/gas utility, internet, and retail topped the list of industries suffering a loss in their very positive or somewhat positive ratings. These industries experienced between 15 and 11 point declines in overall approval. This correlates with an overall slump in positive ratings from the public, which reached a national average of 39% in 2021—the lowest since the industry was at the same level in 2011.

Surprisingly, more Republicans rated these industries lower than Democrats rated them, mirroring a drop in aprroval of the federal government.  Republican approval of Washington fell 28 points from 2020 to 2021 to a new low of 9%, while Democrat approval increased by 20 points to 44%. The next most significant fall among Republicans was for the oil/gas sector, where approval dropped 26 points to 34%. Democrat opinion fell two points to 22%. The utilities industry took a similar fall among Republicans, from 60% to 35%, a net loss of 25 points. These changes come after a change of power in Washington, the implementation of policies that impacted energy production, transmission and generation, leading to a summer of higher utility and gas prices.

Among Democrats, two of the top three increases in positive perception came for the pharmaceutical and advertising/public relations industries, followed by the automotive industry and professional sports. By contrast, Republican approval declined by double digits for the pharmaceuticals and automotive industries, while advertising netted a loss of eight points and the already low opinion of professional sports (24% approval) remained unchanged 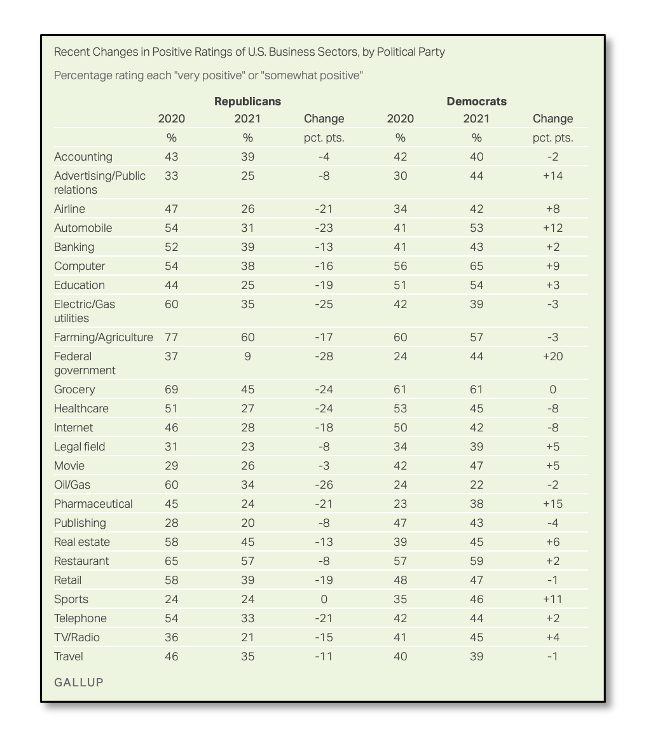 Changes in public perception of specific industries are common, and approval by party often varies by which party holds the White House.  During the Bush and Trump Administrations, data shows Republican approval across these industries trended higher than that of Democrats. Similarly, for the eight years of the Obama Administration, Democratic approval for various sectors trended higher that Republican approval. 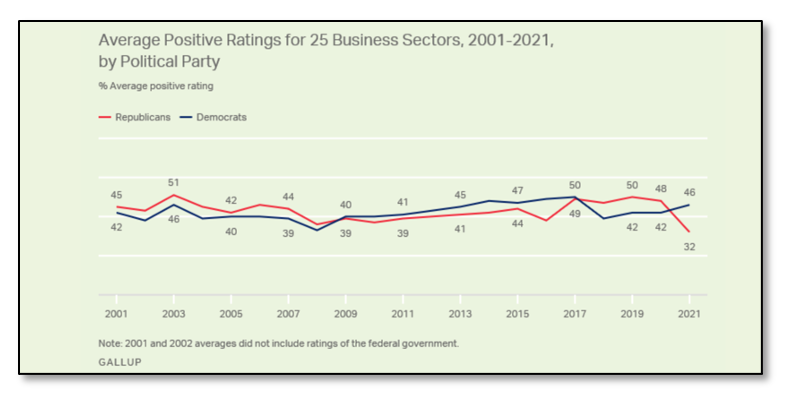 One factor that is particularly noteworthy from the poll comes in the form of the overall divide between Democratic and Republican perception of these industries: the gap today is the biggest in the last two decades for which Gallup data is available. The average positive rating for an industry among Democrats is 46%, while Republican approval has sunk to an all-time low for either party of 32%. As we look toward the 2022 midterms, Republicans have no shortage of foils to beat up on.  Let’s hope they are smart in picking their targets.

Polling News
Partisan preference shifted heavily in 2021. After a tumultuous first year for President Biden, recent polling from Gallup shows Americans are leaning toward Republicans at a level not seen in more than 25 years. ...
Read More
Share on:

Polling News
Except for Vice President Mike Pence, the last four U.S. vice presidents have seen their approval ratings above water at the end of their first year in office. ...
Read More
Share on:
“
RT @RSLC: .@EricHolder, @BarackObama, and Democrats across the country don’t care about ‘fair maps’ and will say whatever they need to in o…
”