New Gallup polling reveals President Joe Biden is now down to a 43% approval rating, the lowest since he took office and a 14-point drop from his high-water mark of 57% in April 2021. Months of policy failures and bad decisions that garnered negative headlines have taken their toll on the Biden Presidency. 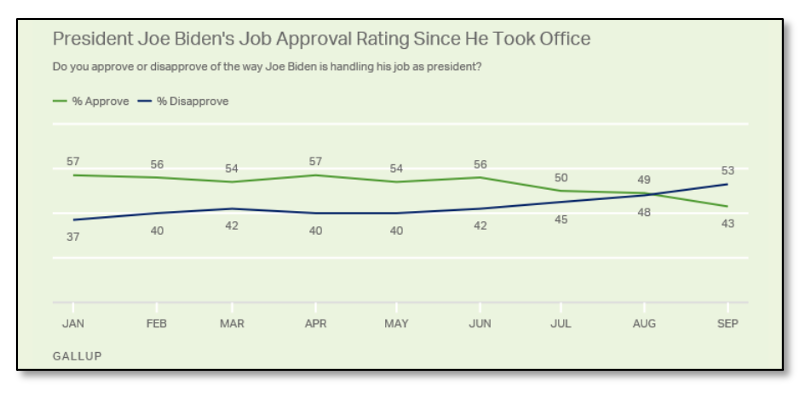 Among the last four occupants of the White House, this is the second lowest mark for a president in his first nine months, with only President Donald Trump polling lower at this point at 37%.  Among Republicans, President Biden has a 6% approval rating, down from a high watermark of 12%, while Democrats rate him at 90%, down from his high of 98% at the beginning of his term.

However, Biden’s greatest drop is among independent voters.  He once held a solid rating with them at 61%, but today independents give the president a 37% approval rating.  The 24-point decline is sharp, with two-thirds of it having occurred in the last three months. The failed pullout strategy in Afghanistan, rising inflation, missteps on Covid, the growing crisis at the border, and failure to make progress on the president’s initiatives in Congress may have a permanent effect on public opinion of President Biden. 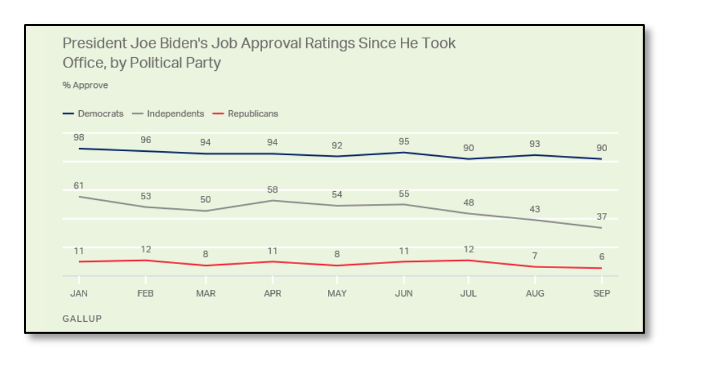 As the president sinks, a sub-sample of the same poll shows Vice President Kamala Harris is not in quite as bad a shape.  Her numbers remain at a tie, with a 49% approval/disapproval rating. Among Republicans, Harris polls at 4%, while Democrats rate her at 92%. The key group of independents rates Harris at 46% approval, over-performing the president by nine points.

While it’s early in Mr. Biden’s term, these numbers may be indicative of troubles to come. The 2022 Midterm Elections are creeping closer, and the window is quickly closing on Biden’s time to win over the Senate’s moderate Democrats to make progress on his policy agenda. The balance of power in Washington is on the ballot in less than 15 months, and voters may then decide whether Mr. Biden will get four years of a Democratic Congress to pass toward progressive policy, or whether voters will force him into a bipartisan course. Republicans have an opportunity to keep the pressure on by prosecuting their case against the President’s policy agenda.  Only time will tell if they’re effective.

Polling News
Partisan preference shifted heavily in 2021. After a tumultuous first year for President Biden, recent polling from Gallup shows Americans are leaning toward Republicans at a level not seen in more than 25 years. ...
Read More
Share on:

Polling News
Except for Vice President Mike Pence, the last four U.S. vice presidents have seen their approval ratings above water at the end of their first year in office. ...
Read More
Share on:
“
RT @RSLC: .@EricHolder, @BarackObama, and Democrats across the country don’t care about ‘fair maps’ and will say whatever they need to in o…
”