History On Republicans’ Side

Democrats took all of one minute after Supreme Court Justice Ruth Bader Ginsberg’s death to immediately go on the attack, calling on the U.S. Senate and President Trump to hold off presenting and voting on a judicial nominee until after the November 3rd General Election.  Senate Majority Leader Mitch McConnell and almost all Republican members of the Senate have said they will vote on President Trump’s Supreme Court nominee.  There have been heated reactions from Democrats with House Speaker Nancy Pelosi going so far as to ridiculously suggest she would bring up impeachment again in order to stop the president’s nominee from advancing. However, history is on Republicans’ side.

Back in August Dan McLaughlin wrote a piece for National Review that noted there have been 29 instances in American history where there was open Supreme Court vacancy in a presidential election year, or in a lame-duck session before the presidential inauguration.  There have been ten vacancies in a presidential election year when the White House and U.S. Senate were from opposite parties. In six instances, the sitting president made a nomination before Election Day and in four, a president made nominations after the election.  However, three of those were not confirmed and instead left open for the winner of the just-completed election.  There was only one instance (Grover Cleveland’s nomination of Chief Justice William Fuller in 1888) where the Supreme Court nominee was confirmed before Election Day. 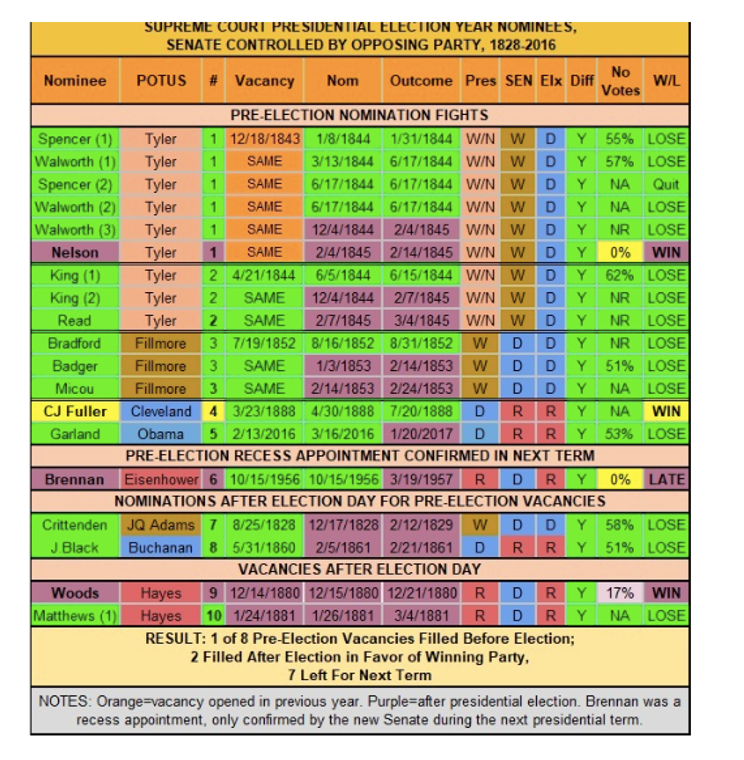 There have been 19 times between 1796 and 1968 where presidents attempted to fill a Supreme Court vacancy in the presidential election year when their party controlled the U.S. Senate.  Ten nominations came before the General Election; nine were confirmed.  In the other nine occasions, the nomination was made after the election in the lame duck session.  The only one not confirmed was George Washington’s 1793 nominee, withdrawn on a technicality and resubmitted and confirmed in the next Congress.  So, history suggests that absent divided government (as in 2016 when Republicans held the U.S. Senate and Democrats the White House), a sitting president typically nominates, and the Senate typically votes on confirmation.