Obama’s Legacy May Not Be What He Hoped For

How will President Barak Obama’s legacy fare among other modern presidents?

A January 21 Gallup report highlights that Mr. Obama’s average approval rating for his seventh year in office was 46.2%, which is on par with the 46.5% average approval rating for two-term presidents.  This places him above the seventh-year averages of Presidents Harry Truman (26.5%), Ronald Reagan (48.2%), and George W. Bush (33.3%), but below Presidents Dwight Eisenhower (63.9%) and Bill Clinton (60.5%).

President Obama’s presidency has been plagued by the worst recovery from a recession in U.S. history and extreme partisanship.  He has averaged a 13% approval rating among Republicans since he took often, whereas other recent presidents have had more support from their opposing party.  For example, George W. Bush had an average approval rating of 23% among Democrats, Clinton 27% among Republicans, George H.W. Bush 44% among Democrats and Reagan 31% from Democrats.

It is unlikely in his final year in office the President will see a dramatic increase in his approval rating average, especially given strong discontent about the direction of the country and the economy. 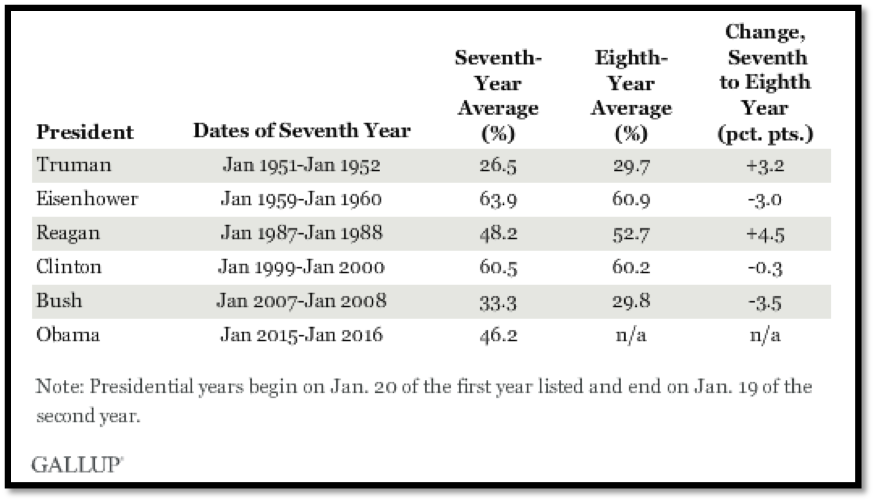 Polling News
As Congress debates the debt ceiling, the bipartisan infrastructure bill and the Administration’s “Build Back Better” package, Americans are growing impatient with the lack of progress. ...
Read More
Share on:

Polling News
A recent study from FiveThirtyEight.com finds that bipartisanship in the Senate is slipping more and more, as moderation fades and partisan and personal agendas take front and center.   ...
Read More
Share on:

Polling News
New Gallup polling reveals President Joe Biden is now down to a 43% approval rating, the lowest since he took office and a 14-point drop from his high-water mark of 57% in April 2021. ...
Read More
Share on:
“
maybe that’s because they really don’t like what’s being sold to them https://t.co/G91CDYUBaH
”