Republicans made significant gains with middle-class voters in 2016, according to a Pew Research Center analysis of 221 metropolitan areas.
Democratic support declined between the 2008 and 2016 in 196 of these regions. 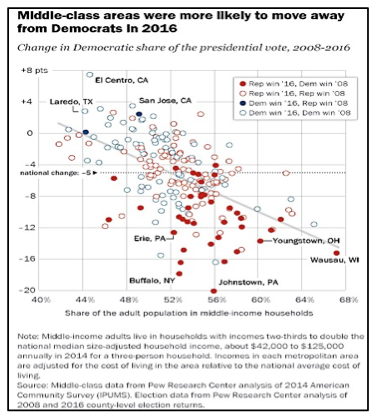 Republicans’ message resonated with these middle-class voters in 2016.  As the Republican-led Congress begins work this week and President-Elect Trump prepares to take office, they should keep in mind how they can deliver on the issues they promised action on during their campaigns, like tax reform and ObamaCare.  If they succeed in this, they have an opportunity to keep these newly-won regions in the Republican column in elections to come.