For most of the last three decades, the partisan preference of Americans long has favored Democrats. In a roundup average of survey data from 2022, Gallup found while Americans are almost evenly split between self-identifying as Republican or Democrat (actual and leaning), Republicans now hold a single point advantage at 45% to 44%. 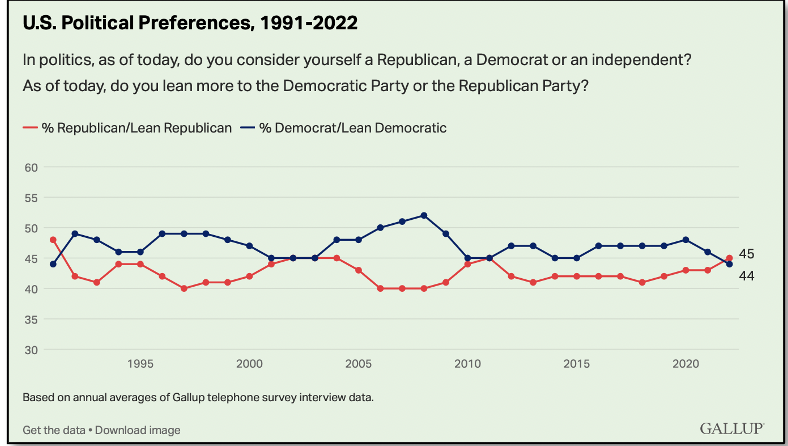 Why It Matters: The shift to near parity might be indicative of a broader political shift among voters that could continue. Gallup speculates that it will carry into 2023. Historic numbers of voters are also self-identifying as independents instead of aligning with either party.

The Independent Trend: Since 2011, the number of Americans who describe themselves as independents has never fallen below 39%. Gallup’s analysis indicates this is not soon to change, as millennial and GenX voters are consistently independent instead of leaning toward one party or the other as they age, which was the normal trend for previous generations. The tendency of younger voters to remain independent as they age may have been a reason why Arizona’s Sen. Kyrsten Sinema became an Independent late last year. It’s not clear if her move will lead to a reelection victory for her in a state where other/nonpartisan (33.89% of registered voters) voters may soon outnumber Republicans (34.67%). They’ve already eclipsed Democrats (30.66%).

2023 Implications: Republicans slightly outnumbering Democrats is a good sign moving into 2023. Several states will hold local elections this year, and three – Kentucky, Mississippi, and Louisiana – will hold their statewide elections. Kentucky and Louisiana’s governors are now Democrats, and their national party will work hard to reelect them. The seats, both in traditionally Republican states, will not be easy to retain if Republicans have a one-point national advantage all year.

The Bottom Line: Over time, Republicans have been slowly eating away at the 8% advantage Democrats had in 2008. The GOP must keep connecting with the broad spectrum of independents by demonstrating results. There is a path for Republicans to grab a significant share of those voters and thereby ensure electoral success. Meeting these voters where they are will be key to wins in 2023 and the 2024 presidential election. Republicans already won a net 3% of all votes cast in the 2022 election, so finding innovative ways to retain and grow its strength among independents would ensure the GOP takes the White House next year.

Polling News
On the 15th ballot, the Hon. Kevin McCarthy of California was elected Speaker of the U.S. House of Representatives.  ...
Read More
Share on: