Partisan preference shifted heavily in 2021. After a tumultuous first year for President Biden, recent polling from Gallup shows Americans are leaning toward Republicans at a level not seen in more than 25 years. The Democrats’ turn downward coincided with the sharp decline in job approval for President Biden starting in the third quarter of 2021. Gallup’s poll included 12,416 adults in all 50 states and D.C. over the course of 13 telephone polls throughout 2021. 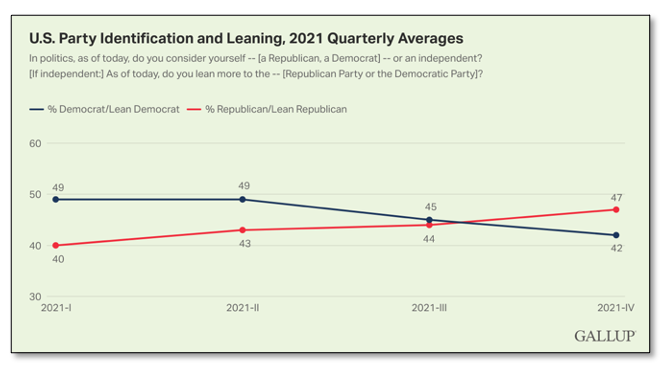 When asked if they considered themselves a Democrat or Republican or an independent, which party they leaned toward more, 47% of adults identified with Republicans, compared to 42% identifying with Democrats. This is a sharp departure from Democrats’ position in the first quarter of 2021, when they held the largest advantage since the end of 2012. Republicans last held a 5% advantage in 1995, during the historic flip of the House for the first time since the 1950’s, when they won 54 additional seats in the chamber. 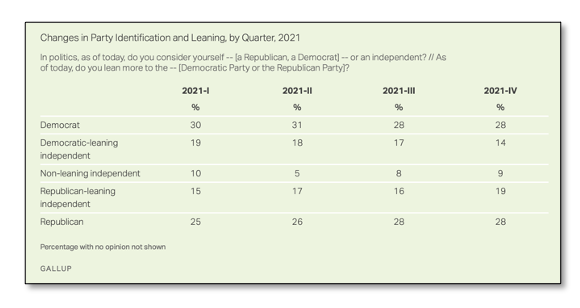 With the wind at the back of the GOP and Congressional majorities in the headlights, Republicans have a monumental chance of having the most successful midterm in recent history—and certainly in the last 25 years. The strong correlation between the partisan shift and the President’s job approval ratings cannot be ignored. Keeping the Biden Administration on the defensive and not allowing national Democrats should be a key piece of strategy. Messaging and delivery of effective, solution-based results upon victory would certainly pave the way to a lasting majority.