With Iowa less than a month away, does any Democratic presidential candidate have an advantage?  FiveThirtyEight.com says the early states are wide open, with no Democrat pulling away in all four states.  Polling averages show Bernie Sanders, Joe Biden, Pete Buttigieg, and Elizabeth Warren all within five-points in both Iowa and New Hampshire.  In Iowa, Sanders leads with 20.1% in the FiveThirtyEight average, Biden is a close second (19.5%), Buttigieg at 16.8%, and Warren 15.2%.  In New Hampshire, Sanders leads with 19.6%, Biden is again second (18.5%), Warren third with 15.1%, and Buttigieg is at 13.9%.  The rest of the field is in single digits. 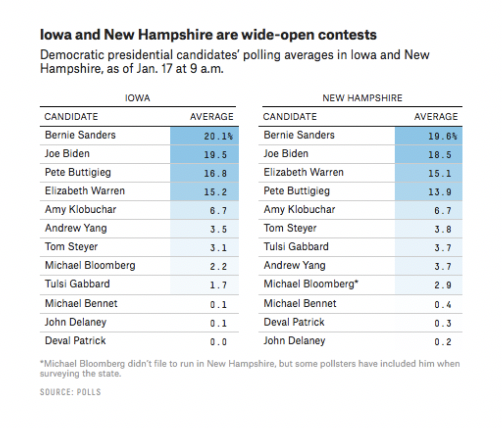 Will Sanders and Warren split progressives and allow a more traditional Democrat like Biden or Buttigieg to win convincingly in Iowa and New Hampshire?  Who could then take the next two contests?  Polling averages now show Biden leading in both Nevada (22.7%) and South Carolina (35.2%).  Biden’s lead in South Carolina (+20.7 points) may be too much for anyone to overcome.  However, if Sanders wins Iowa and New Hampshire, he may have enough momentum to come in second in South Carolina after a victory in Nevada, where he trails Biden by only 3.1 points. 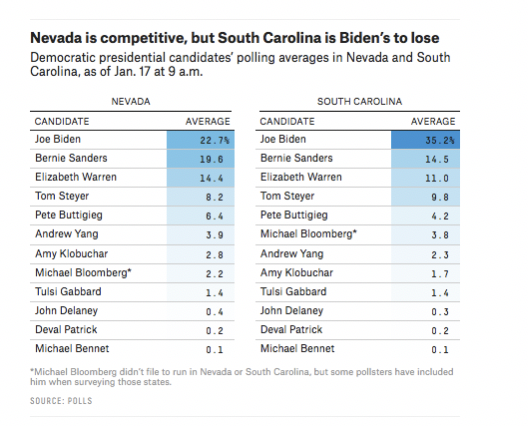 In 2016, Sanders won Iowa, but then lost New Hampshire, Nevada, and South Carolina. If Bernie can outperform his 2016 vote in those last three states, someone will have to run the table on Super Tuesday to slow Sanders down.