The Wall Street Journal highlighted the record-breaking rate at which voters are voting early.  Of the states that already started voting, eleven have passed 50% of 2016 levels, with Kentucky, Pennsylvania, and Virginia exceeding 2016 levels already. 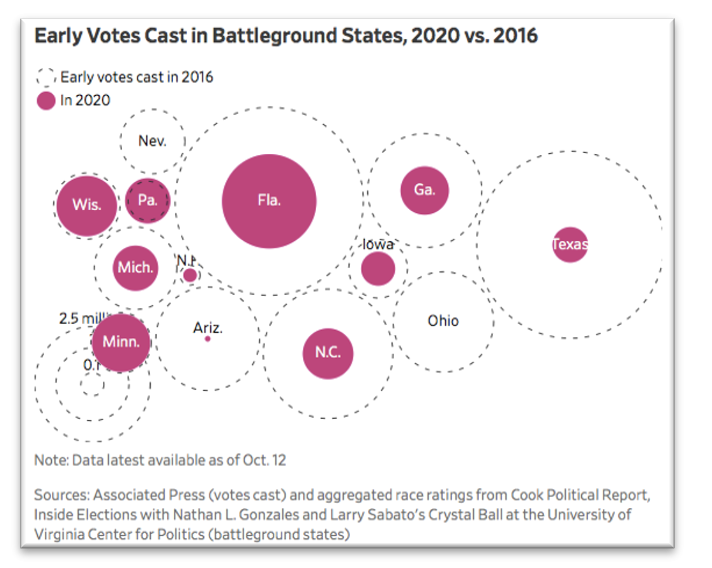 The U.S. Elections Project has been tracking early and absentee vote returns for the last few cycles.  As of Oct. 13, they show 15,062,564 ballots cast in states that report their early vote returns.  Democrats are largely outpacing Republicans by nearly three-to-one (3,744,343 to 1,543,096) in the states with party registration (CA, CO, FL, IA, KS, KY, MD, ME, NC, NJ, NV, OK, PA, and SD).  Four of those states (FL, IA, NC, and PA) are battlegrounds that could determine the presidency.

The Election Project notes that while increased early vote may be cannibalizing the Election Day vote, several factors (record early vote in 2018, greater enthusiasm registering in polling, and increased small dollar donors) suggest 2020 is on track to break early vote turnout records because of voters who previously didn’t turn out at all.  With less than 20 days to go until Election Day, campaigns from presidential down to dog catcher would be wise to adapt their voter contact budgets.  GOTV is happening now, not just in the last 72 hours as in the past.