What Democrats Risk With Far-Left Play

The Democratic Party has made a risky gamble by leaning into extreme positions – health care for illegal immigrants and the costly, ineffective Green New Deal, for example – will help rally the far-left base to the polls in 2020.  However, the New York Times – not exactly a bastion of conservatives – found that this strategy may have negative results.  The Times gave a split sample of participants news highlighting this leftward shift.  It focused on policies like free college, health care for illegal immigrants, and government-run health care, while the other half were read unrelated topics.

Independent voters, who may ultimately decide the election, were six percentage points less likely to vote for a Democrat after hearing about their fringe policies compared with Independents who were read the bland content.  Six percentage points is a significant shift, especially considering how important these voters will be, both for the White House and down ballot U.S. Senate and U.S. House races. 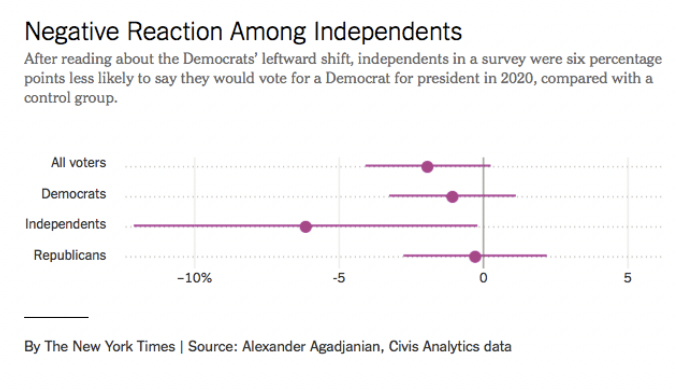 Is the trade-off worth it?  It doesn’t appear so.  The play-to-the-base garners only a modest boost (three points) among Democrats with almost no movement indicating that Democrats are more motivated to vote after hearing their party’s far-left policies and leaders of the party.

Democrats will keep leaning in to impeachment and socialist-light initiatives, but these numbers should give them caution and give Republicans an opening with independents.  Republicans do not need to shift equally hard into their base by fringe proposals, but continue to offer practical alternatives to Democrats’ untenable proposals and prove the GOP to be the party of results.