October is here and campaigns are in the final phase of their messaging arcs, presenting their case to voters and fending off October surprises. As the final month of the 2022 Midterm Election begins, the Real Clear Politics polling average shows Republicans lead on the generic Congressional ballot. 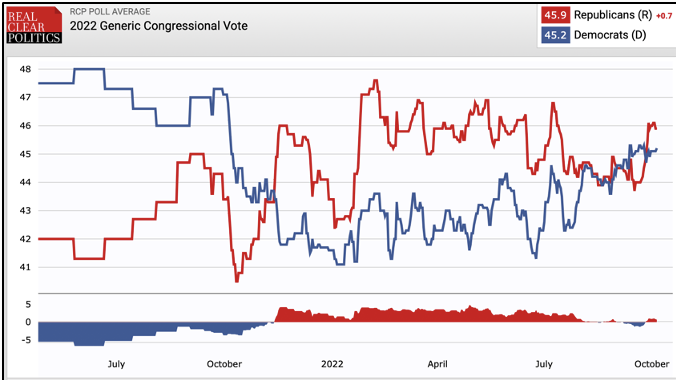 In April 2021, when pollsters started tracking the generic ballot for this election and while the Biden Administration was still finishing unpacking boxes in the West Wing, Democrats held a lead of D+5.5%. In late May 2021, the ballot crested for Democrats as their lead expanded to a net D+6.7%. Toward summer’s end and into the fall, the lead began shrinking as Biden faltered on inflation, bungled the withdrawal from Afghanistan, and key pieces of the Administration’s agenda failed in a Democratic Congress. The generic ballot tightened and on Nov. 13, 2021, Republicans gained the edge. Republicans have held the advantage on the RCP average most of the past year, the except for a couple of small periods that were largely reactionary to the Dobbs v. Jackson decision overturning Roe v. Wade. Moving forward, the average currently stands at R+0.7%.

Wave elections are not automatically given or won by chance and luck. Republicans being favored on the generic ballot, and as has been seen this cycle, being trusted on the issues, are only part of the battle. As final calculations are made by donors, committees, and outside entities as to which campaigns to back, special emphasis should be put on ensuring that campaigns that are on the cusp of winning get the support and resources to get across the finish line. The GOP Congressional candidate pool this year is uniquely strong; with continued support and steady messaging on the issues that matter, especially in tough districts, these candidates will deliver a strong majority in just over a month.