Voting Groups To Watch For In 2020

There were mixed takeaways in Tuesday’s elections.  In Kentucky, the first African-American – a Republican – was elected Attorney General, and the unpopular incumbent Republican governor lost. We saw that no matter the state or support for the president, candidates and campaigns still matter.  In Virginia, Democrats outspent Republicans and ran on strong ideological policies, they were able to flip the House of Delegates and State Senate and pick up dozens of local offices across the Commonwealth, proving that a message, vision, and a choice, rather than an option to be against, still matters.

While seeing these results as predictive of 2020 Elections may be an overstatement, Republicans can find valuable lessons and begin working groups that are moving away from Mr. Trump.  Consider the Washington Post/ABC News poll.  In a match-up between the president and the current Democratic front-runner, Joe Biden, it found that Independents, nonwhites, women, and white college graduates are responsible for Mr. Trump’s deficit.  Among registered voters, Mr. Biden leads Mr. Trump by seventeen points, winning nonwhites by 63 points, women by 31 (64%-33%), Independents by 17, (56%-39%), and white college graduates by 16 (57%-41%).  Worrying for the president, while he won 88% of Republicans in 2016 according to exit polls, this poll found only 80% of Republicans support him.

The election is a year away and it is not yet clear who the Democratic nominee will be, however, these off-year elections are a good reminder for the president and Republicans running up and down the ballot to pay attention to swing voters.  Independents and white college graduates especially will play outsized roles in suburban congressional swing districts and states with close Senate races like Arizona, Colorado and North Carolina.  Republicans only need to take a look back at Tuesday’s elections for examples. The now Republican Attorney General-elect from Kentucky outperformed the incumbent Republican governor and outperformed in the Louisville and Cincinnati suburbs.  Even the bottom of the Bluegrass State GOP ticket – its candidate for Treasurer – ran 152,000 votes ahead of Gov. Bevin’s 704,000 vote total.  In addition, Virginia Republicans were wiped out in the northern Virginia suburbs of Fairfax and Loudon counties and lost ground in the Richmond suburbs.  These suburban voters need some deliberate and sustained attention from GOP candidates. 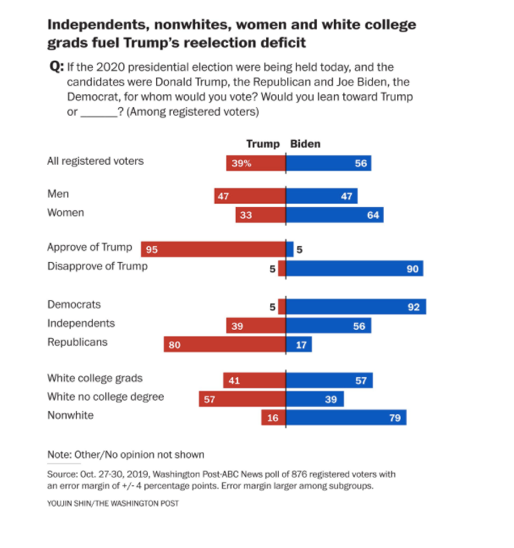