While Democrats didn’t have a terrible night on Nov. 8, the Associated Press VoteCast survey show might have a problem developing with younger voters. 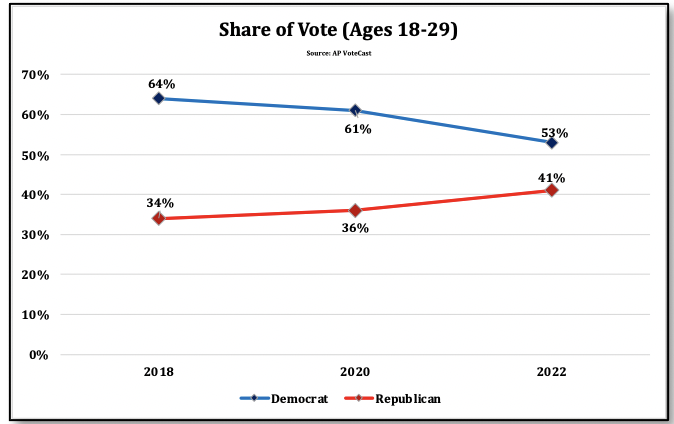 Why It Matters: Younger voters have been a reliable voting bloc for Democrats, delivering a sound margin for President Joe Biden in the 2020 election. In this 2022 midterms, voters under 30 did not turn out for Democrats like they did two years ago. This may be a sign of trouble to come for what was once an overwhelmingly reliable Democratic voting bloc.

The AP VoteCast survey is a sweeping survey that tries to capture the overall trends of each election through detailed surveys and modeling of voter behavior. The trend shown by the latest VoteCast survey shows Democrats should be worried that they’re rapidly losing a key part of their coalition.

Enthusiasm Lags: Among Democratic voters under 45 across several states, VoteCast found enthusiasm was not as strong as in previous elections. The AP summary found that even in areas where Democratic support was strong among young voters, they were less enthusiastic than older voters. For example, among youthful John Fetterman supporters in Pennsylvania’s Senate race, only 43% of those 18-45 said they were enthusiastic about him, while 43% supported him with reservations and 12% voted for the Democrat because they opposed the other candidate.

A Buckeye Nugget: In Ohio’s contentious Senate race, VoteCast found that those 18-29 were split evenly between Democrat Tim Ryan and Republican J.D. Vance. Whether this is in part to the quasi-celebrity status of Vance as an author or a deeper trend in Ohio’s young voters has yet to be determined, but it is a sign of trouble for Democrats.

The Bottom Line: The trend shows the GOP moving toward parity with Democrats among young voters. To build upon the gains Republicans have made, they must better understand what conservative issues can provide in-roads to this increasingly reachable part of the electorate.