Repercussions Of A Government Shutdown

After threats of a government shutdown over border wall funding emerged last week, news reports now suggest that the White House and Congress may avoid such an impasse.  That would be wise and probably for all concerned.  A USA Today/Suffolk University poll found 43% of voters would blame President Donald Trump and Republicans for any shutdown while only 24% would blame Democrats, 30% would blame both equally. 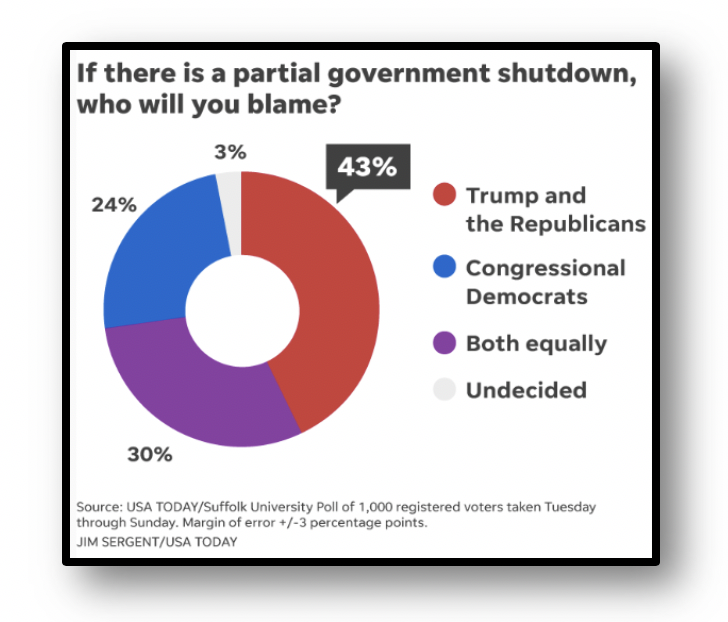 In past shutdowns this year, Republicans and Democrats have shared blame but voters also blamed President Trump each time.  When the government shut down for three days in Jan. 2018, a Quinnipiac poll found 32% of voters blamed Congressional Democrats and just 18% blamed Republicans.  Thirty-one percent, however, also blamed Mr. Trump.  When there was a threat of a shutdown in February, Quinnipiac found more voters would blame Democrats – 35% – while 27% of voters would blame Republicans and 22% would blame the president.

When Congressional Republicans walked into President Barack Obama’s shutdown trap in Oct. 2013, 53% percent blamed them while just 29% blamed President Obama, according to a Washington Post/ABC News poll.  The same poll found that 51% of Americans blamed Republicans for the 1995 shutdown and 50% blamed the GOP for the 1996 shutdown, compared to just 24% and 27%, respectively, who blamed President Bill Clinton.

Congressional Democrats were disunited and without a plan earlier this year and so shouldered much of the responsibility for the Jan. shutdown, as was the case with Congressional Republicans in Oct, 2013, 1995 and 1996 when they were without united strategies.  To avoid the same fate today, President Trump and Congressional Republicans must navigate this current debate by sticking together and avoiding either the appearance or substance of dysfunction.

Election Intent and Perception During Pandemic

Polling News
Despite partisan fear-mongering over how the COVID-19 pandemic could impact the November election, most voters feel they’ll be safe when voting. ...
Read More
Share on:

Polling News
During a sustained period of heightened polarization, majorities of both Republican and Democrat voters have retained their party registration. ...
Read More
Share on:
“
yeah, that’s about right https://t.co/4BhxaxjnQs
”