The dust has barely settled on the 2022 Midterms, but many Americans, politicos, and journalists are already looking to the 2024 Republican Presidential Primary. With one declared candidate on the GOP side, is this the earliest the presidential primary contest has kicked off? FiveThirtyEight has looked at how early before the Iowa Caucus candidates have gotten into the race in years past. 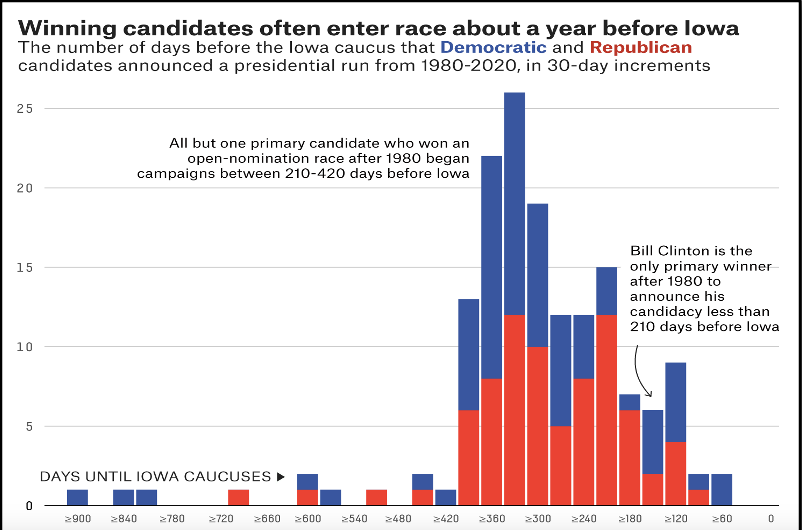 Why It Matters: While former President Donald Trump entered the race for the White House this past November, almost 400 days before the first election in the nominating contest, he will likely not be the only major candidate seeking the nomination. His entry is earlier than most candidates have typically chosen to launch their presidential bids.

Since the current nominating process came to be in the 1970s, the majority of presidential candidates started their campaigns less than a year from the first-in-the-nation states and their contests. The most successful bids for president in the last 50 years have started in that timeframe.

Long Bids = Longer Shots: The record for earliest bid for president is held by former Maryland Cong. John Delaney, whose bid started 920 days before Iowa in the 2020 Democratic Presidential contest. Most candidates who started more than 420 days from the first caucus were unsuccessful in garnering major support, with the exception of former Vermont Gov. Howard Dean, whose launch 598 days prior to the Iowa Caucus ended in a third-place loss in the 2004 Democratic Primary. In contrast, during his 2016 campaign, Mr. Trump announced 230 days before Iowa. In 2012, Mitt Romney announced 212 days before Iowa, and former President Bill Clinton launched his successful bid 178 days before Iowa.

Bottom Line: The field is anything but settled when it comes to the 2024 Republican Presidential Primary. This is the first election in modern history that has a former president entering the contest after being defeated for re-election. Mr. Trump will be joined by several more candidates. That said, with historical precedents being set aside in this race, the field could be far from being set even in June. Being first to the starting line doesn’t guarantee victory.