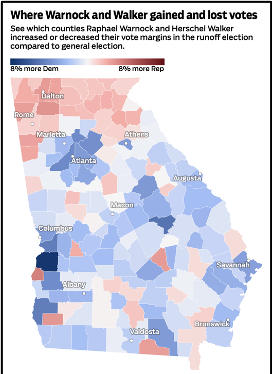 Why It Matters: In analyzing the 2022 midterms, some observers are quick to dismiss the quality of candidates and their messages, believing outcomes are largely determined by environmental factors. However, Republicans should learn from the Georgia runoff that a candidate’s persona and quality of their message are critical elements in determining victory or defeat.

By The Numbers: Walker underperformed in crucial suburban counties. He should have done well in the runoff in suburban Atlanta, but didn’t, largely because he stuck to the message of his primary campaign and didn’t pivot to a head-to-head contest with Democratic Sen. Raphael Warnock.

The Message: Warnock pivoted in November, hosting a rally featuring Warnock-Kemp voters. In early-runoff events, Walker kept giving the stump speech he’d used for month. He didn’t alter it to appeal to moderate suburbanites that could have brought him victory. Instead, Walker often delivered remarks that confused voters, for example comparing vampires to werewolves.

The Everyman: While Walker failed to focus on what he’d do as the 50th Republican vote, Warnock described himself as a Georgian who’d get things done for his state and neighbors.

The Bottom Line: Republicans failed to offer a winning argument in the Georgia run-off. A decision to keep saying the same things and thereby fail to offer a compelling reason to vote for Walker helped give the victory to Warnock. In the future, the GOP must offer a compelling message that appeals to suburban voters who were once the party’s bedrock but who have been leaving the GOP’s ranks for six years.