Hispanic voters are increasingly starting to vote Republican, according to recent polling from the Wall Street Journal conducted by ALG Research and Fabrizio, Lee & Associates. The poll was conducted as part of a new polling series by the Wall Street Journal that brings together the two firms, traditionally Democratic and Republican pollsters, respectively, to help understand the evolving American political landscape. They found Hispanic voters are now evenly split between the two major parties.

The polling shows that on a generic ballot for Congress, Hispanic voters are split 37%, 37%. Support for a Republican was higher among Hispanic men, where 45% favor a GOP candidate, while only 29% would support a Democrat. Among Hispanic women, it’s almost exactly the opposite, with 46% supporting a Democrat while 29% support a Republican. 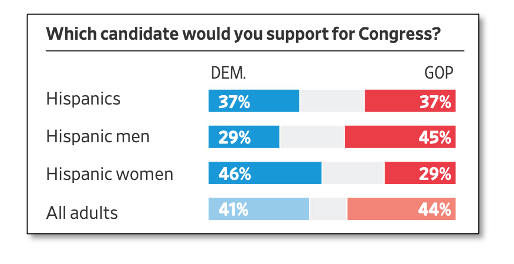 When asked about a theoretical 2024 matchup between President Joe Biden and former President Donald Trump, there were fewer undecided voters. Biden pulled 44% of the Hispanic vote in the theoretical rematch, while President Trump pulled 43%. The former president holds a strong lead with Hispanic men with 56% supporting Trump and 33% for Biden. Among Hispanic women, the opposite was again true, with 55% supporting Biden and 30% for Trump. 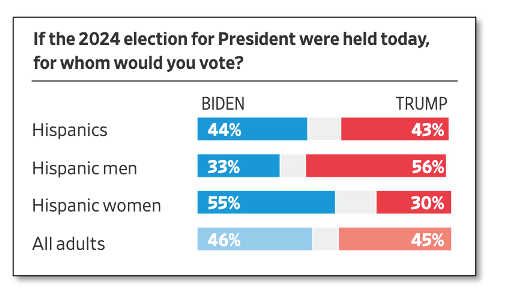 Mr. Biden is now underwater with Hispanic voters, with 54% overall disapproving of his job performance to 42% approving. Among Hispanic men, disapproval is at 61%, with only 38% approving. With more Democratic-leaning Hispanic women, Biden’s numbers were tied, with 46%/46% approval/disapproval. 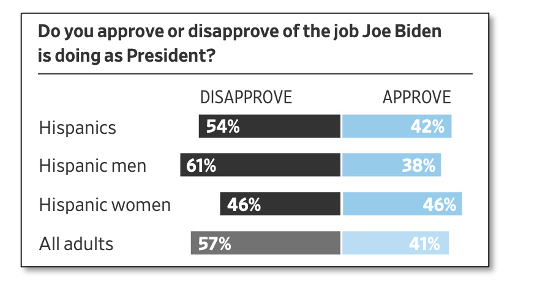 Having long counted Hispanics as safely in their corner, Democrats now have real cause for concern. Hispanic voters are the country’s fastest growing voting bloc, making up 1 in 8 voters today. The GOP can continue changing the perception of Republicans in Hispanic communities and thereby making meaningful gains heading into the 2022 midterms.