Sanders’ advantage came from voters 18-29 years old.  He won over 50% of this age group, while Buttigieg took just 20% and the other candidates were in single digits.  Klobuchar won older voters, taking 32% of those over 65+, while Sanders won only 14%. 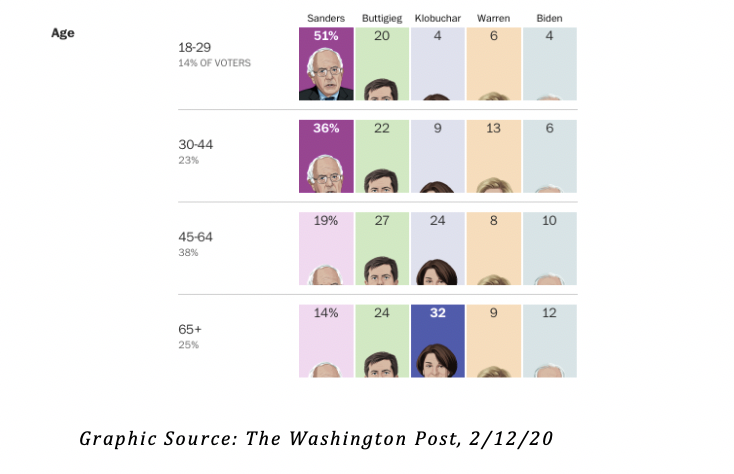 Half of the New Hampshire voters waited until the primary’s final days to make their decision.  Buttigieg won 29% of them while Klobuchar won 24%.  Thirty-seven percent of the half who made up their mind long in advance voted for Sanders, while 23% went for Buttigieg.  This may be one of Tuesday’s more telling messages.  Sanders voters were likely his fervent supporters in 2016 and still holding on for a Bernie Revolution, but a growing number of Democratic primary voters waiting until the final to make their decision aren’t his people.

Sanders must address his age problem.  Winning younger voters is a good talking point, but they will be a small share of the primary electorate in each state (e.g., just 14% in New Hampshire).  He must find a way to win over African American voters and older Democrats, both more likely to turn out than young voters.

Late deciders will remain a problem for Sanders while giving Buttigieg, Klobuchar and Michael Bloomberg possible sources of momentum and victory.  Now let’s see if these candidates have the messages and for two of them, sufficient money to make their case.