Effects Of The Inflation Formerly Known As ‘Transitory’

The inflation formerly called “transitory” by the Biden Administration looks like it may be here to stay for a while. The University of Michigan Survey of Consumer Sentiment reveals that one year into President Biden’s term, consumer sentiment has hit its lowest point since the Great Recession’s bottom a decade ago. 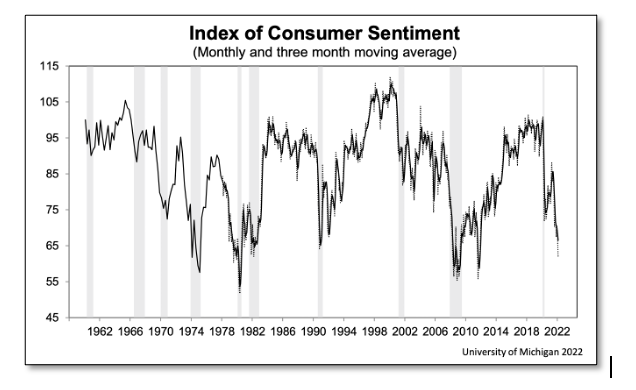 The Biden Administration did its best early on to coax the American public into believing that inflation wasn’t a threat.  The response has been a steady fall in consumer sentiment—likely a result of weaker personal financial prospects, reduced confidence in federal economic policy, and a very poor overall economic outlook.  The result is a 19.7% fall (now at 61.7%) in consumer sentiment. The trend accelerated in March of 2021 when Mr. Biden’s American Rescue Plan was passed, sending almost $2 trillion of federal funds into the economy and creating a 7.7% inflation rate that demonstrated consumer inflation is here to stay for some time.

This has negatively impacted the American consumer’s view of the current economic conditions and expectations for the future. Households with an income over $100,000 saw sentiment fall 27.5% overall from last year, demonstrating that they understand the gravity of the situation. Expectations took a large hit as well, falling 20.5% from Feb. 2021 to this month, hitting 68.5%. With continuing supply chain shortages and interrupted flow of services resulting from COVID-19, nearly half of all consumers expect to see a decline in their inflation-adjusted income.

Inflation is likely the largest concern among voters in 2022. Republicans are faced with the challenge of offering voters a message on inflation they understand and agree with. The Survey of Consumer Sentiment seems to show voters understand what inflation means for the economy long-term. For other voters, the impact is seen that what they pay at the pump and the grocery is what drives their vote decision. Republican messaging on this issue that focuses changing economic policy could ensure wins across the board and across the nation.