Some clear trends are emerging following the end of the Biden Administration’s first year. The subpar results of Biden’s first year are detailed in recent polling from Gallup’s Jan. 3-16 poll. This annual survey measures a wide range of sentiments and captures the general satisfaction of Americans on social issues and the government’s posture. 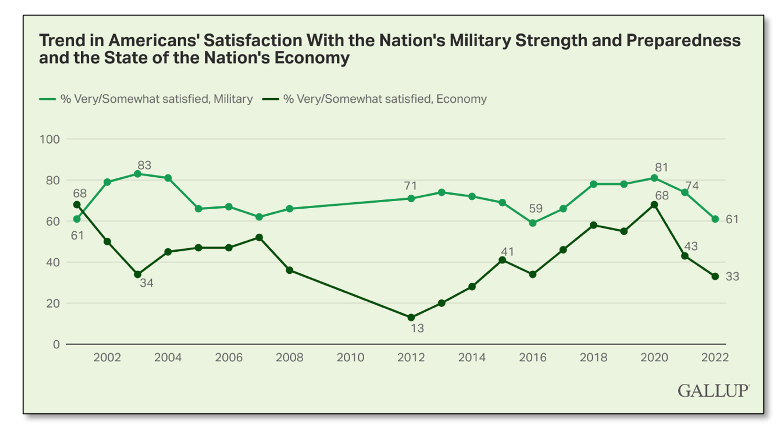 After a year of so-called “transitory” inflation, increased prices, less purchasing power, and supply chain shortages, Americans’ satisfaction with the state of the nation’s economy has fallen from a Trump Administration high of 68% in 2020 to 33% – a low not seen since the Obama years. The 35-point fall is a huge hit to the Biden Administration, which has failed to deliver policy wins on a number of economic initiatives and is largely seen as ineffective. Satisfaction with government regulation of businesses and industries took a similar fall, dropping from 36% to 28%.  This eight-point drop followed several regulatory actions by the Biden Administration including COVID-related mandates and other restrictive measures.

Overall dissatisfaction of the American public with the Biden Administration on these and many other issues paints a picture of a failing Democratic government. That’s bad news for Democrats walking into a midterm with the balance of power in DC on the line. Republicans have far more issues to run on in 2022 and are aided by growing opposition in the Democratic Party and its agenda and competence. With a solid platform of reasonable, common-sense solutions to the many issues facing Americans today, the prospects for a strong GOP wave election are looking very good.