Devil In The Details On Medicare-For-All

Most Democratic presidential hopefuls have fallen in line to support “Medicare-for-All.”  At first glance, Americans support the concept with a January Kaiser Family Foundation poll finding 56% of Americans are in favor.  However, support drops drastically once they hear of its downsides.

According to the poll, when people hear Medicare-for-All will “lead to delays in people getting medical tests and treatments,” 70% oppose and only 26% support.  When they hear it will “threaten the current Medicare program,” 60% oppose and only 32% support.  When they learn it will “require most Americans to pay more in taxes,” 60% oppose and 37% support.  Fifty-eight percent of Americans oppose Medicare-for-all when they learn it will “eliminate private health insurance companies,” while only 37% support.  Only the ideas of guaranteed health insurance for all and eliminating insurance premiums and out-of-pocket costs receive positive responses, but these do not appear to offset the inevitable cost of higher taxes, delays in treatment, and elimination of private insurance. 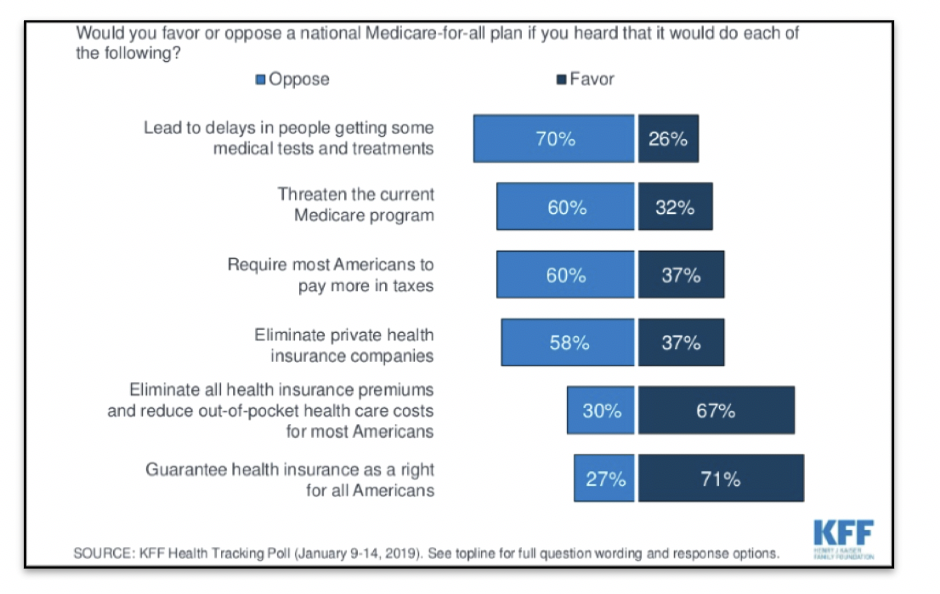 Today the Democrat presidential horse race and rising Congressional Democrats who are avowed Socialists are pushing the entire Democratic Party to the fringe left.  Policies like single payer health care – which is what Medicare-for-All is – that require higher taxes, eliminate private health insurance and lead to delays in tests and care are not favored by most Americans.  If Democrats keep showcasing Medicare-for-All, President Donald Trump and Republicans are likely to have an advantage with swing and independent voters on this issue in 2020 as long as the GOP prosecutes the issue, no matter who wins the Democratic presidential nomination.