President Biden’s standing in the polls going into his second SOTU this week was not strong. The State of the Union Address is an opportunity for presidents to showcase the accomplishments of the last year and frame the agenda for the next, a chance for a reset if needed. With low approval now, Mr. Biden was expected to pivot from a year of defense, economic, and domestic policy failures and present a new and more practical path forward. Instead, the address resembled a repackaged version of last year’s proposals. 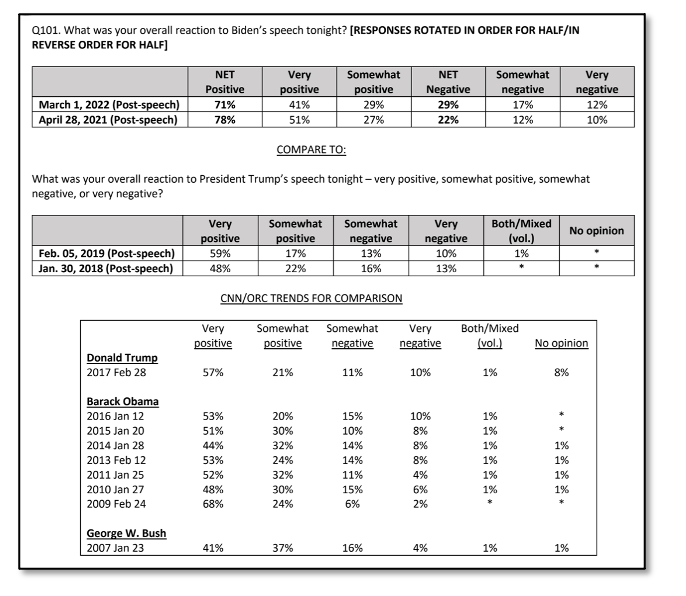 Following President Biden’s Tuesday SOTU address, 71% of those polled felt positively about his speech, while 29% felt negative. This was a fall of 7 points from 78% reacting positively to his first SOTU and a steep fall from the 94% and 78% net positivity seen for the second SOTU of Presidents Bush and Obama, respectively. Biden’s net negative of 29% was the highest negative rating of any president following their SOTU in at least 22 years. The lower than historical positivity rating and much higher than normal negativity in reaction to President Biden’s SOTU reflect the poor and polarizing position he’s in.

President Biden’s SOTU falling flat and the highest net negative reaction reflect the fact that his agenda, regardless of the pomp and circumstance it is packaged with, is not well received by the American people.  This puts Democrats in a poor position for the 2022 midterms and the 2023 legislative year that will set up the 2024 presidential election.