An analysis of Wesleyan Media Project data published in The Forum: A Journal of Applied Research in Contemporary Politics found 2016 presidential television advertising differed from past trends in volume, timing, and messaging.  The Clinton campaign had a huge on-air advantage over the Trump campaign, running 402,344 ads over the course of the 2015-2016 election cycle compared to the Trump campaign’s 120,908 ads.  This advantage was especially pronounced in the campaign’s final two months (198,689 Clinton campaign ads to 76,068 Trump campaign ads).  The Clinton campaign’s problem was their message as they dedicated more ads to personality traits alone compared to any other presidential campaign in the last 16 years.

Over 60% of Hillary Clinton’s advertising focused on candidate characteristics, while only 25% concentrated on policies.  Donald Trump’s advertising, on the other hand, was a little over 10% personality-driven versus 70% policy-focused.  The Trump campaign was more conventional in its approach.  Every presidential campaign since 2000, with the exception of John McCain’s, devoted less than 25% to personalities and at least 60% to policy positions.

Despite their volume advantage, the Clinton campaign’s personality-dominant message did not win over voters.  The Trump campaign offered policy positions.  Democrats now trying to make sense of their 2016 loss should keep this in mind.  If they keep repeating their mistakes by focusing more on President Trump personally instead of offering their own agenda to Americans, they could remain in the wilderness for the foreseeable future. 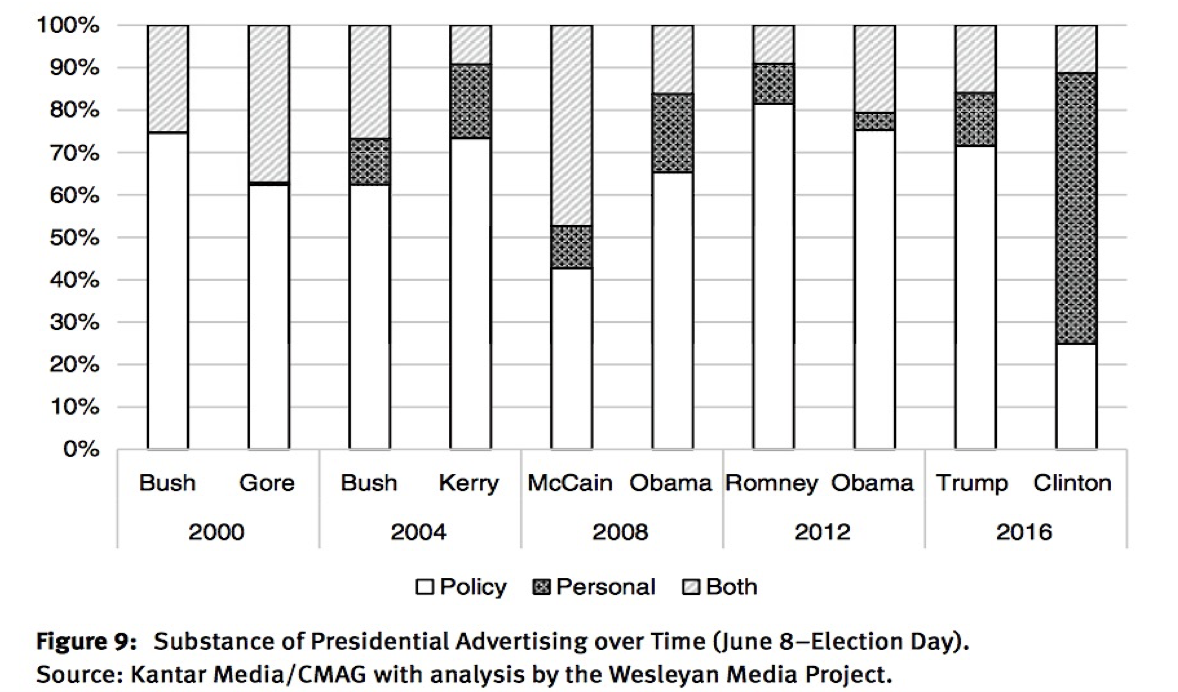 Polling News
This week started with Democrats in disarray, as the Iowa caucus winner is still unknown at the time of this writing.  ...
Read More
Share on:

Polling News
The Iowa caucus is four days away.  While its results will have a big impact on the Democratic presidential contest, a new poll from ABC News/Washington Post shows that regardless who wins this first contest, President Donald Trump is in a strong position...
Read More
Share on:

Polling News
With Iowa less than a month away, does any Democratic presidential candidate have an advantage?  ...
Read More
Share on:
“
Right all but twice since 1948 – W&L Mock Convention says Sanders https://t.co/M5Vlk0kvWv
”