Tuesday’s Northeast presidential primaries strengthened former Secretary of State Hillary Clinton’s and businessman Donald Trump’s frontrunner statuses.  That said, both still face disgruntled elements within their parties.  If Mr. Trump and Mrs. Clinton move on to November, will the disenchanted voters unite behind their party’s nominee or cross party lines?

Historically, Democratic presidential candidates sufffered more significant party defections. Gallup data from 1952 – 1972 and National Exit Poll data 1976 – 2012 compiled by FiveThirtyEight’s Nate Silver reveals Democrats saw at least 20% or more of party members defect in seven contests (1952, 1968, 1972, 1976, 1980, 1984, 1992), while Republicans saw at least 20% of their voters support another party’s candidate in just two elections (1964, 1992).  For Democrats, their biggest defections were 1972 (33%) and 1980 (33%) when their choices were Sen. George McGovern and President Jimmy Carter, respectively.  Republicans saw the highest number of voters cross party lines in 1992, when 27% of Republicans voted against President George H.W. Bush.  Generally, the common thread in these years is that the nominees were chosen after a turbulent primary or primary challenge to an incumbent.

It is worth noting, as Silver does, that there are exceptions.  For example, though the 2008 Democratic primary was long and tumultuous, Democratic voters overall united that November to support then-Sen. Barack Obama.  The 2016 Democratic and Republican nominees will need to immediately address dissatisfaction within their own parties if they want to unify their ranks for this fall’s General Election. 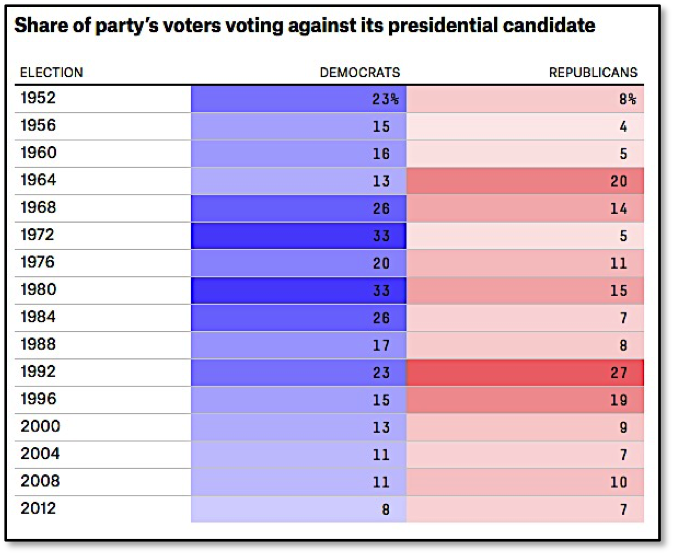