The Tough Map For Senate Democrats:

Senate primary races in key states on Tuesday had positive outcomes for Republicans looking to keep their U.S. Senate majority.  Strong GOP candidates emerged in West Virginia and Indiana, as the party avoided nominating a troubled candidate that would have forfeited the race to a Democrat in November.

This is just the latest news to complicate the Democrats’ pipe dream of winning back the Senate majority.  Data compiled by Axios reveals how steep that hill will be for Democrats to climb.  Of the 35 Senate seats up for reelection this year, 26 are held by Democrats (or Independents that caucus with Democrats).  Ten of these Democratic seats are in swing or red states President Donald Trump won in 2016 (FL, IN, OH, PA, MI, MT, MO, ND, WI, WV).  There is only one Republican seat in a state where Hillary Clinton narrowly won in 2016 (NV).

This does not mean the road for Republicans will be an easy one, however.  Some of these years show a state’s political lean does not seal its fate.  Democrats up for reelection in 2018 are seasoned politicians who know their states.  While the map is tough for Democrats, Republican challengers will need to avoid mistakes and run good campaigns if they are to win. 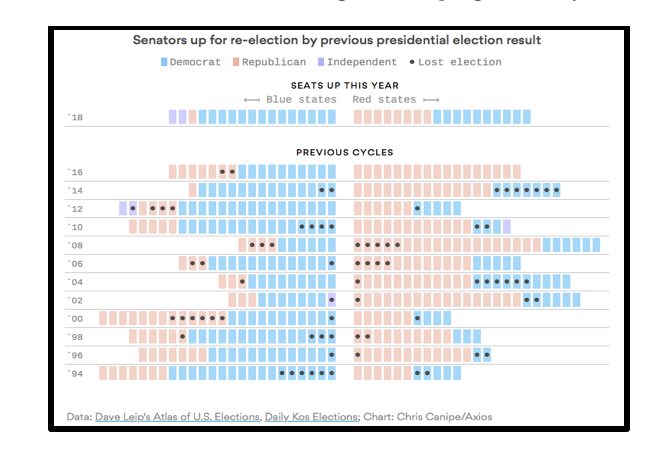