In the wake of the egregious leak of a draft Supreme Court opinion that would overturn Roe v. Wade, many commentators speculated that this revelation would shift the dynamics of the 2022 Midterm Elections in favor of the Democratic Party. Democrats have lagged Republicans in voter enthusiasm for months as President Joe Biden continues being a disappointment. Many voters had high expectations for the president who promised to bring people together and “build back better,” only to see him deliver record inflation, foreign policy disasters and polarizing rhetoric and action. 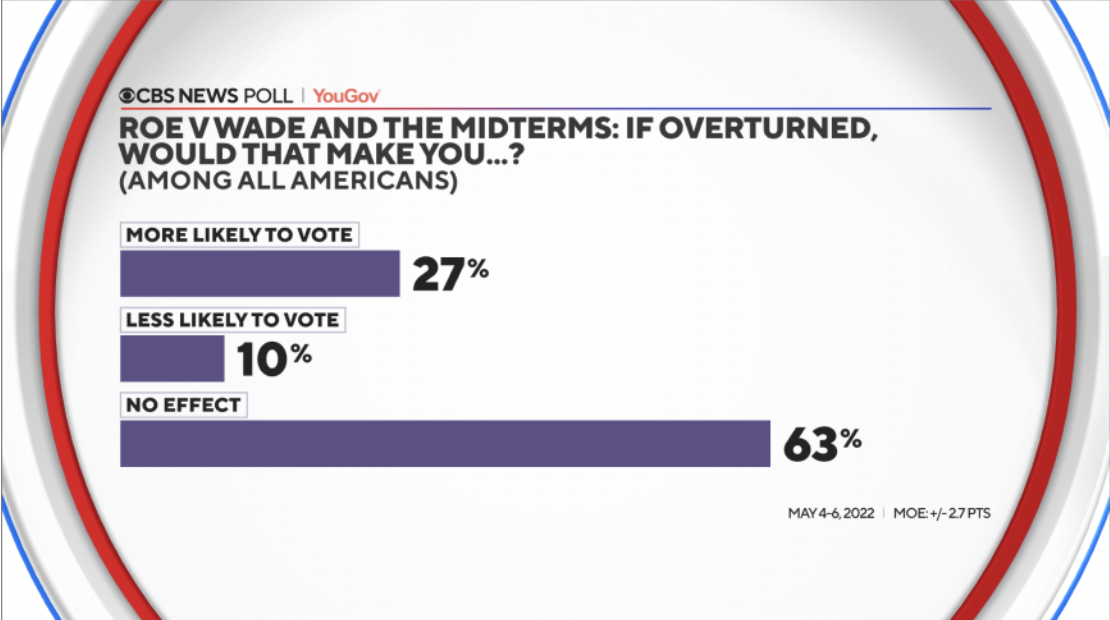 Could abortion be the issue Democrats hope to ignite their base and win the midterms this November? A recent CBS News poll shows that it may not be the silver bullet. Only 27% of Americans said they are “more likely to vote” if Roe v. Wade is overturned, compared to 10% of Americans who said they are “less likely to vote,” and 63% of Americans who say a potential Supreme Court decision would have “no effect” on whether they’d vote this November.  Democrats are, however, more motivated by abortion to vote than Republicans. Forty percent of Democrats say they’re “more likely to vote” because of the issue compared to just 17% of Republicans who say the same. Still, less than half of Democrats (47%) say a Supreme Court decision to overturn Roe v. Wade would impact their decision to vote in November. Not exactly the lightening rod Democrats need.

Over the coming months, the debate around abortion will reach a fever pitch. Democrats will likely continue to believe that it’s a winning issue but will do so at their peril. Even voters who believes Roe v. Wade should not be overturned likely agree that protesting outside a Supreme Court justice’s private home is unacceptable.  Democrats also risk going too far. This was apparent this week when Sen. Joe Manchin broke with his party to vote against legislation to expand abortion rights nationwide, stating his own party went “too far.” Also, while President Biden and Congressional Democrats hope abortion will dominate voters’ concerns this fall, voters are likely to be more concerned about skyrocketing gas prices, rising grocery prices and not enough baby formula on shelves.

Polling News
With roughly seven months until the midterm election, Americans believe economic issues are the most important problem the country faces. ...
Read More
Share on:

Polling News
There’s no doubt that former President Donald Trump remains the dominant figure in the GOP. ...
Read More
Share on:
“
Absolutely right - America has a vital interest in seeing out him defeated and Ukraine victorious. https://t.co/E9P2GQtRP3
”