Presidential Approval Versus The Economy

The party in power during Midterm Elections generally does well when voters are happy with the economy.  But what happens when the president’s approval ratings are lower than average during an economic upturn?  According to an Axios analysis, if the Midterms are defined by presidential approval rating alone, Republicans could lose around 68 seats.  If the Midterms are defined by voters’ view of the economy, however, Republicans are on track to gain as many as 55 seats.  Obviously, the final outcome will be in between and leaning to the downside.  The question is, how much to the downside? 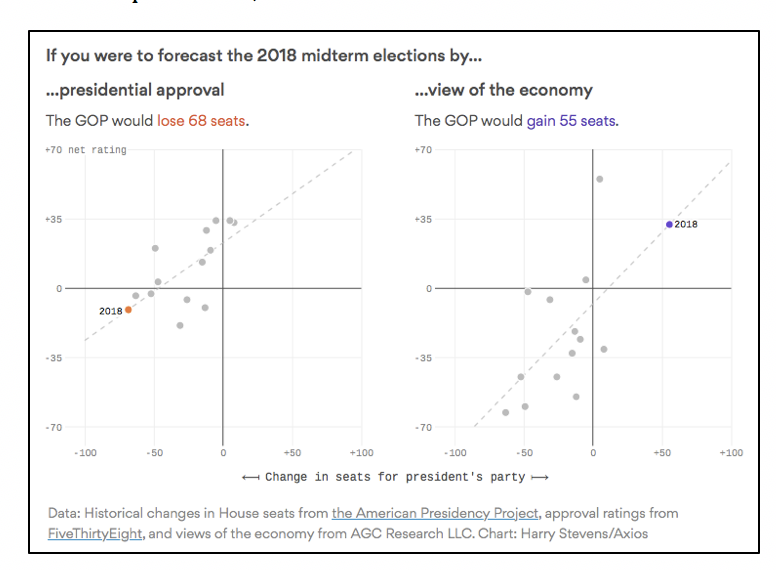 There is no historic precedent for a Midterm where the president’s job approval is lower than average and approval of the economy is high.  Typically, the latter boosts the former.  That said, 2018’s outcome will not be determined solely by the president’s standing or the sentiment about economy but by a combination of the two.  But what matters more, views of the president or feelings about the economy?

With the economy improving under the president’s watch, however, his approval ratings may continue to improve, as they have in recent weeks.  That, on top of any progress on foreign policy issues may boost his ratings enough for Republicans to minimize losses in the House to some degree.  The only thing candidates in these at-risk districts can be sure of is their own campaign and standing.  Focusing on issues important to voters in their districts, offering proactive solutions, and running well-organized campaigns is the only way to run, given that these two big factors – presidential approval and feelings about the economy – are largely outside their control.