Democrats must hold ten seats in states President Donald Trump won in 2016 (FL, ND, IN, MO, OH, WV, MI, PA, MT, and WI) and pick up two GOP-held seats to win control of the U.S. Senate.  A recent Axios/SurveyMonkey poll, however, shows if the election were today, Democrats would pick up two Republican-held seats but lose three red-state seats and with them, their dream of a Chuck Schumer-led majority. 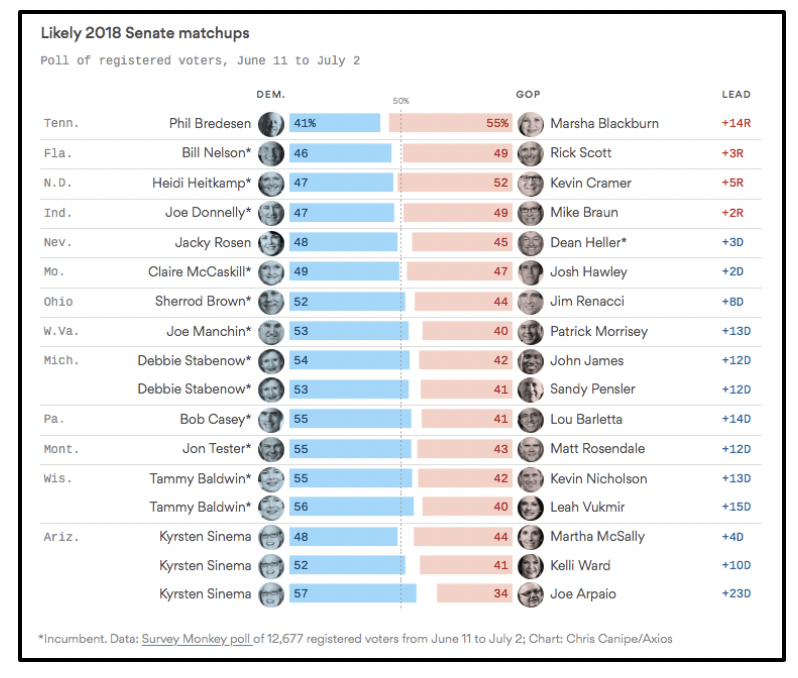 The poll finds Republican Senate candidates leading Democratic Senate incumbents in IN (+2), FL (+3), and ND (+5).  Democratic Senate candidates have a chance in two Republican-held states, NV (+3) and AZ (range of +4 to +23, depending on which candidate emerges from the August GOP primary).  Democratic incumbents in MO (+2), OH (+8), WV (+13), MI (+12), PA (+14), MT (+12), and WI (+13 or +15, depending on eventual Republican candidate) appear safe now, but many of these, like MO and MT, could start to shift if the Democrat incumbent obstructs President Trump’s Supreme Court pick or goes too far left to placate their fringe base.  Either way, the Axios/SurveyMonkey poll suggests the road for Democrats to a Senate majority is too rough.