As major Biden proposals continue to languish and the Jan. 6th hearings draw lots of attention, recent polling from Monmouth University shows the public’s faith in their government is at its lowest point since 1980. 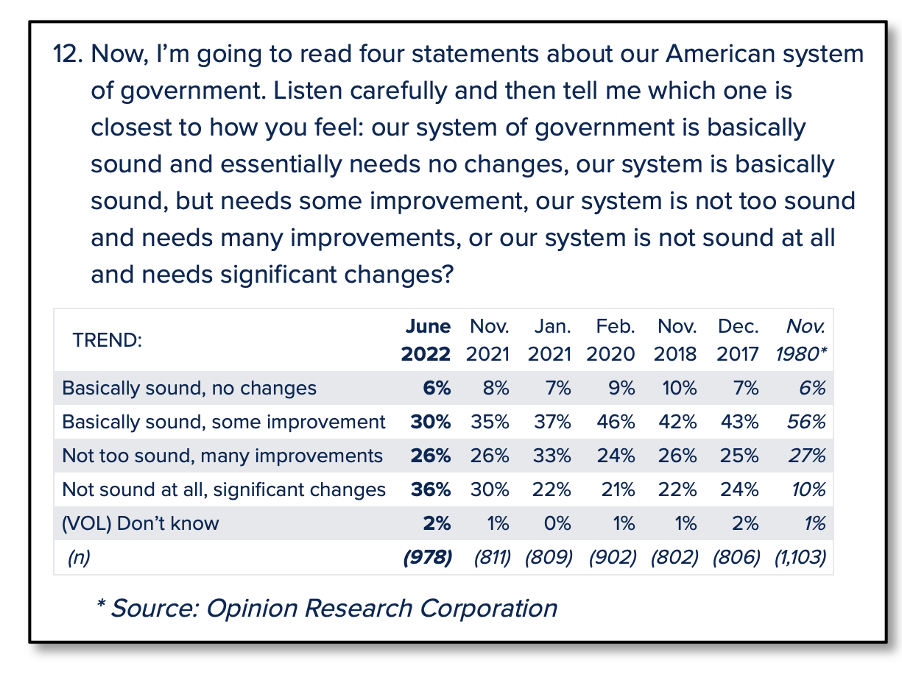 When asked whether the American government was basically sound or not sound and needed some, many, or significant improvements, in the poll 72%  stated they believe our government is not sound, while only 36% suggested it is basically sound and in need of some or no improvement. The opposite was true in Nov. 1980, shortly after Reagan’s election, when 62% said our system of government was sound while 37% said it wasn’t.

The most significant change in the numbers was the 36% who stated they believe the American system of government is not sound at all vs. 26% who said they believe it is not too sound. Up until Nov. 2021, data shows that those viewing the system as not too sound outnumbered those viewing it as not sound at all. The shift is largely due to the lack of any meaningful action on the issues affecting Americans most and due in large part to partisan gridlock and a lack of effective White House leadership.

It’s been clear over the last year and a half of the Biden Administration and Democratic control of Washington that they have little interest in true bipartisan solutions and consensus building. On the most pressing issues and largest pieces of the Biden agenda, Democrats have failed to build consensus within their own party, let alone with their Republican counterparts. The red wave of 2022 may not be a singular event; in fact, it can continue into 2024 and beyond. The key is for Republicans to offer an actionable agenda that provides progress on the kitchen table issues voters care about, and then take that agenda to Washington and put it into effect.

Divided government and gridlock are a result of our nation’s current partisan divide. If Republicans in 2022 gain majorities in Congress with a clear message and mandate from the voters, their subsequent actions could beget greater success for the GOP in 2024 and more, well into the future.